On the Fourth of July in 1971, the Fillmore West closed for good. The celebrated San Francisco music venue ended its nearly three-year run under the management of Bay Area concert promotion impresario Bill Graham with a series of historic and locally focused shows.

The original Fillmore, at the corner of Fillmore Street and Geary Boulevard, had been Graham’s primary music venue from late 1966 until July ’68. Creedence Clearwater Revival played a three-night series of shows (July 2, 3 and 4, 1968) that capped Graham’s operation of the auditorium. 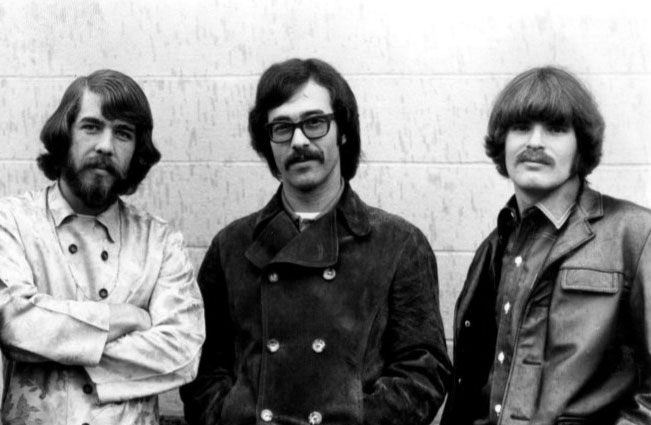 Clifford, Cook and John Fogerty in the earlier days

Seeking a larger space for concerts, Bill Graham relocated his enterprise to the former Carousel Ballroom, renaming it Fillmore West. Even prior to Graham’s move, the venue at South Van Ness Avenue and Market Street had established itself as a kind of ground zero for the burgeoning rock & roll music scene. (Recently the upstairs ballroom space was used to host the Immersive Van Gogh Exhibit San Francisco.)

Nearly every rock band of note—especially those based in or near the Bay Area—appeared on the stage of the Fillmore West. Big Brother and the Holding Company, Moby Grape, Sly and the Family Stone, Santana, Credence Clearwater Revival and the Grateful Dead all played within the first eight weeks of Graham’s tenure.

Reflecting Graham’s eclectic approach to concert bills, on a given night the Fillmore West might feature such unlikely pairings as The Who and blues guitarist Magic Sam; the Grateful Dead and New Orleans-based Preservation Hall Jazz Band; Ten Years After and Sun Ra; and the Moody Blues and Chicago (Transit Authority). In fact all those shows happened in the Fillmore West’s first few months.

But the Fillmore West’s run was as brief as it was spectacular. Graham made the decision to shutter the venue in July 1971. In many ways, a final five-night extravaganza brought the Fillmore West full circle, focusing again on bands from San Francisco and broader Bay Area. Among other artists, those shows featured Boz Scaggs, Flamin’ Groovies, It’s a Beautiful Day, New Riders of the Purple Sage, Quicksilver Messenger Service, Hot Tuna, Tower of Power, The Grateful Dead and CCR.

History repeated itself at the Fillmore West for the final show of Graham’s reign. As had been the case exactly three years prior, Creedence Clearwater Revival was on the bill.

It was a different band than before, though. From the East Bay group’s earliest days as The Blue Velvets and then as The Golliwogs, the band—led by singer-songwriter John Fogerty—had been a quartet: brother Tom on guitar, bassist Stu Cook and drummer Doug “Cosmo” Clifford rounded out the lineup. But by very early 1971, John Fogerty’s band mates were bristling under what they saw as his domineering approach. By February of that year, Tom Fogerty quit the group, which continued somewhat uneasily as a trio.

From one perspective, John Fogerty’s near-total domination of CCR made sense. He wrote and sang most all of the band’s material up to that point. Under his leadership, the group scored nearly a dozen Top 40 singles; each of the group’s first six albums would eventually sell more than a million units or better. But after his brother’s departure, the remaining Fogerty initiated a creative about-face, insisting that Cook and Clifford contribute their own original material to the next record, whether they had anything worthwhile or not (spoiler: they pretty much didn’t).

But the fire of the group’s playing—even without Tom Fogerty—was never in question. With a rock-solid rhythm section supporting John Fogerty’s powerful voice, guitar and songs, their onstage performances were as vital as ever. Running through a concise and mostly-hits 14-song set in under an hour, CCR rang out the Fillmore West in style.