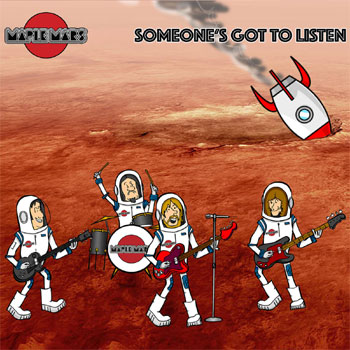 When Maple Mars released Galaxyland in 2010, I was thrilled. Thought it was the group’s fourth album, Galaxyland was my introduction to the group led by Rick Hromadka. And what an introduction it was, drawing from some of the best high-energy and creative influences in rock, yet never becoming overwhelmed by them. In short, Maple Mars proved itself to be much more than the sum of its influences, providing a fresh yet warmly familiar take on the styles in which it trafficked.

An artist has to follow his or her muse, of course, and to my mild and admittedly selfish disappointment, Hromadka subsequently turned his attention to matters beyond Maple Mars. In 2012 he resurfaced with a new project, Ruby Free, featuring his then-spouse on lead vocals. Ruby Free was a successful venture, but for those who were looking for a follow-up to Galaxyland, it simply wasn’t that. In 2014, Hromadka returned under his own name with Trippin’ Dinsoaurs. Much closer in style and tone to Maple Mars, it would be well worth hearing, but it still didn’t scratch the itch for those wanting more Maple Mars. Another Ruby Free album, Shades, was released in 2017; as I wrote at the time, “If you want to hear Rick rock, you should blast off to Maple Mars.”

In 2021, that statement was challenged by the appearance of Better Days, a Rick Hromadka solo album. A full decade-plus after Galaxyland, he put together a set of songs that impressed o na similar level: songwriting, production, arrangement, execution. Better Days earned its place as one of my favorite releases of last year.

But as uniformly superb as Better Days was and is, it still isn’t Maple Mars. And by that point, I had all but reconciled myself to the fact that Hromadka had – for whatever reasons – left his old band behind, and for good. It had been eleven years, so a belated return didn’t seem to be in the offing.

Happily I was wrong, and on multiple counts. First of all, Maple Mars hadn’t gone inactive; the group simply wasn’t releasing new material. The band continued to play live. And now they’ve returned with Someone’s Got to Listen.

The full-bodied, soaring character of vintage Maple Mars is fully intact on the new material. Crunchy chords, delightfully involved melodic lines, soaring vocals and a snap-tight rhythm section are all present. The record opens with “Useless Information,” a song that sounds and feels current while completely connected to (and in line with) the Maple Mars of 2010.

The band was never about one tone or style; variety was one of Maple Mars’ calling cards and major strengths. So it’s no surprise when the group switches gear – second song in – to a ballad-styled opening on “Gliding.” But this is a group with more good ideas than most, so the tune goes unexpected places almost immediately. Maple Mars isn’t a prog band, but their skill and vision means that they adopt some of prog’s aesthetics, packing multiple approaches into a single song. What sets them apart form progressive rockers is that they do it in the compact format of pop-length material; “Gliding clocks in under four minutes. And Hromadka and his band mates make it work in that space.

“Goodbye California” appeared as a single last year; the autobiographical song balances a big, sweeping arrangement with a character that sibtly recalls Klaatu. “Anchord Aweigh” rocks hard, with a sound closer to the best postpunk and ‘90s alternarock. “Someone Take the Wheel” has a glam character that mines the mid ‘70s for its character. “Teenage Dream” is a timeless riff rocker. “Sleepwalking” feels a bit like Sugar-era Bob Mould, but it sounds like classic Maple Mars.

“Silver Craft” swings ofr the fences, and its quality matches its ambition. Floydian space-rock guitar textures add even more interest, set as they are against shimmering acoustic guitars and a heartfelt vocal. Some vintage synth sounds make the song one of the best on the whole set.

“Crooked Smile” dials things back for the album’s only true ballad. The song’s creamy CSN&Y-flavored stacked vocal harmonies have a breezy feel. The album closes with another expertly arranged and deeply textured rocker, “Redemption.” Every single asset of the band is distilled into the tune; it makes a perfect set-closer, leaving the listeners wanting more.

With Someone’s Got to Listen, Maple Mars is back. Fingers crossed that we won’t have to wait until 2034 for the next record.