Album Review: Freedy Johnston — Back on the Road to You 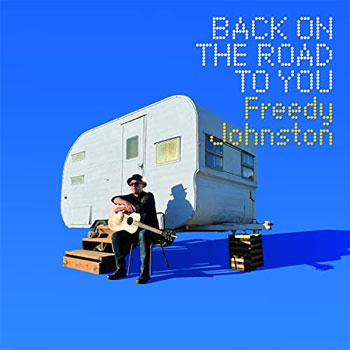 Freedy Johnston is one of those artists whose name has long been familiar to me, but whose music I had somehow never encountered. Odd, that, as he’s somewhat difficult to miss: Johnston released his debut, The Trouble Tree in 1990 and has followed that up with more than a dozen albums since. As a songwriter, he’s held in high regard among his peers and critics alike. He even scored a minor hit single (“Bad Reputation”) for his major- label debut, 1994’s This Perfect World. That’s the record that gained Johnston the most exposure to that point, and he’s been a reliable and compelling purveyor of fine original music ever since.

After 2015’s Neon Repairman, Johnston seemed to go quiet for a bit; he’s only now returned, with Back on the Road to You. A Kickstarter-financed project, it features Johnston backed by a four-piece band with added vocal support in key places from pals like Susan Cowsill, Aimee Mann and Susanna Hoffs. Fine singers and songwriters all, and artists who know a good song (and songwriter) when they encounter one.

As is his standard practice, Johnston wrote all ten of the tunes on his latest. His wry wordplay is as sharp as ever. And the warm, friendly melodicisim of the title track sets the tone for the album. It’s subtly countrified, but other tunes like “There Goes a Brooklyn Girl” have a breezy character that transcends genre. Imagine Gin Blossoms crossed with Marshall Crenshaw and you’ll have a bit of a sense of the music’s character.

The soaring, impassioned “The Power of Love” ranks among the finest moments on the album, but any search for weak tracks will leave you frustrated; this is one solid set. The track sequence keeps listeners on their toes, endlessly switching up between contemplative and finely-wrought tunes like “Somewhere Love” and more upbeat cuts.

And hey, now that I’ve told you about this record, seems you’ll have to wait a bit. The street date for Back on the Road to You is September 9. In the meantime, you can check out “Madeline’s Eye,” a lovely and representative track from the record.