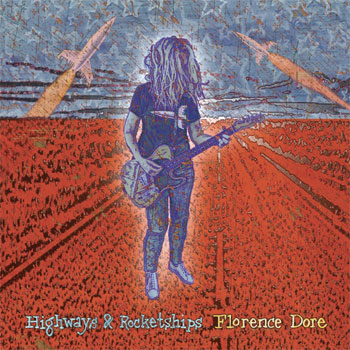 I’ve lost count of how many musicians I’ve encountered who bristle at the prospect of being labeled. And while there’s a usefulness in applying a genre label to an artist, I get it: drawing a line around a creative artist can cause people to make snap judgments.

Florence Dore is nominally an Americana artist. And while I appreciate that style, it is far from a favorite kind of music. So when it comes to potential reviews – features are a different story altogether – I can approach the prospect of an Americana release with less enthusiasm than I bring for, say, soul, rock, prog or easily a dozen or more other kinds of music.

The loss, of course, could be mine. I might overlook something of value, and more subjectively something I’d enjoy. Had I skipped over Highways & Rocketships, that would have been the case. Happily, my attention was attracted by the involvement of half of The dB’s: Peter Holsapple and Will Rigby, both of whom play guitar on the record. There’s also one Mitch Easter on 12-string on one tune (he recorded the album), and Dore co-produced the record with Don Dixon. I can say without hesitation that I’ve never heard anything involving any of those artists that has failed to impress me.

But here’s the thing: none of that is fair to Florence Dore. Holsapple, Rigby, Easter and Dixon are on the record, yes. But their talents are applied in service to Dore’s goals. Not that they’re anonymous here, but Highways & Rocketships is totally Dore’s show. With the exception of one co-write with her spouse (“Lighter”), the songs are all Florence Dore compositions. She sings lead with a strong, compelling and beautiful voice, plays guitar and (as noted above) co-produced the record.

And it’s not all that Americana-ish. There’s a hint of twang here and there, but a rock sensibility is at the core of the songs and their arrangements. Solid stuff. “Rebel Debutante” is a representative cut, with sass, swagger and sexiness, all wrapped in an intelligent tune that has rock’n’roll spirit. “Thundercloud (Rocking With Your Heart)” is a bit more twangy, but it’s cut from the same cloth as Old 97s and Jason and the Scorchers, which is to say rootsy rock. Alongside the horny (heh) “End of the World,” it’s also one of the best tunes among an unfailingly high-quality collection of songs. Recommended.