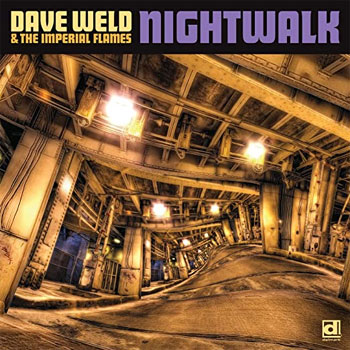 A revered mainstay of the Chicago region’s blues scene, Dave weld has a sterling pedigree. An early member of Lil’ Ed and the Blues Imperials, guitarist Weld struck out on his own in 1988. Seemingly more focused on live performance, Weld hasn’t amassed a huge stack of album releases. But the quality of that material is far more important than quantitative measures. 2016’s Slip Into a Dream showcased both Weld’s guitar firepower and his songwriting chops (with vocalist/collaborator/diva Mona Rose (Monica Myhre). Weld pens and plays original music with classic qualities.

And those virtues are the foundation of his latest, Nightwalk. Story-songs like the opening track, “Mary Who” serve up plenty of Windy City grit and humor. The band lays down a thick, hypnotic vamp while Weld weaves a streetlife tale. His lead licks are initially buried in the mix, but as the tension builds, he opens up. The arrangement ebbs and flows, keeping the listener on the seat-edge.

That rough and ready approach is employed throughout the record, even on delightfully busy cuts like “Don’t Ever change your Ways,” filled as it is with stinging slide and sprightly piano work (the latter form band member Harry Yaseen). The album showcases the Imperial Flames’ revue-style approach, with Myhre taking over for the powerful lead vocal on “Don’t Tell Mama” and four others. Freed from lead vocal duties, Weld peels off some of his most incendiary guitar work on those cuts.

And while Weld and his band are prime exponents of Chicago-style blues, they don’t allow themselves ot be hemmed in by the style. The rollicking “Red Hot Tabasco” is a gumbo of New Orleans blues with some delightful piano work. “Travelin’ Woman” provides space for the band’s four-man horn section to blow with the perfect balance of tightness and reckless abandon.

“Now She’s Gone” is a rewrite of countless Muddy Waters tunes, but it’s done with such style, passion and verve that it’s beyond criticism. “Donde Vas” takes thing in a subtly different musical direction, but still fits neatly into the blues idiom. The slow burning “She Was a Woman” is furious fire of the SRV variety. Drummer Jeff Taylor takes the vocal mic for “Hit by the 103,” with the band mining a vibe reminiscent of early Steve Miller Band. The album-proper wraps with a medley, a steely, wonderfully unhinged reading of J.B. Hutto and Bukka White chestnuts “Loving You” and “Jelly Roll Blues.”

For those who found six minutes-plus of the opening cut not quite enough, the disc is appended with an even-longer alternate version of “Mary Who.”