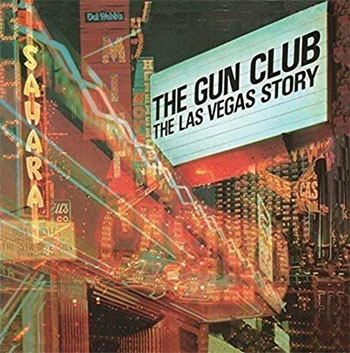 Blixa Sounds’ campaign of reissues of The Gun Club’s catalog continues with a new, expanded version of the group’s third album, 1984’s The Las Vegas Story. Continuing with the moody, atmospheric punk aesthetic of their previous work, The Las Vegas Story may well be the group’s high water mark. While 1981’s Fire of Love was a compelling and accessible work, to my ears the band took a step backward for Miami, their second release. But Jeffrey Lee Pierce and his band mates seem to have reconciled their musical impulses for The Las Vegas Story. The production strikes the perfect balance between polish and scuzz, and Pierces’ songwriting is at its sharpest.

It’s tempting to cede some of the credit for the album’s success to the return of guitarist Kid Congo Powers, who was a founding member but quit before the first record was made. But the truth is more likely that it’s the chemistry of all involved that results in this highly successful outing. The music portended a bright – and potentially commercially successful – future for the Gun Club.

The group’s music is often given the blues label, and while there’s an undercurrent of that genre here, The Las Vegas Story doesn’t limit itself to the I-IV-V blues idiom; the songs have much more in common with alternative/college rock of the era.

Blixa’s reissue appends a ten-song live set recorded in August 1984 at Scorgie’s in Rochester, NY, mere weeks after the release of The Las Vegas Story. Sadly, the band splintered not long after that gig, breaking up in January 1985. They’d re-form within two years, and continue for nearly a decade, finally capitalizing (at least to some extent) upon the critical acclaim they had earned.

The 2022 expanded release also includes a “home movie” on DVD.