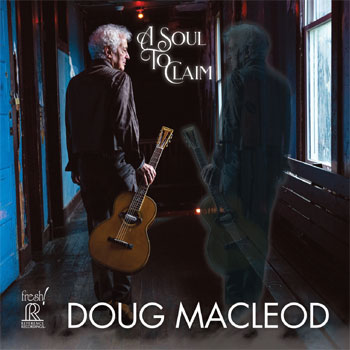 Storytelling singer and guitarist Doug MacLeod has been delivering his brand of acoustic-flavored blues on record for decades; his debut album, No Road Back Home was released in 1984. MacLeod – a multiple Blues Music Award nominee and two-time winner – recently relocated to Memphis, and the spirit of the Bluff City informs his latest album, A Soul to Claim.

The record was produced by Jim Gaines, a pro with a long list of high-profile credits who got his start behind the recording console at Stax. And A Soul to Claim builds on MacLeod’s skillful, expressive acoustic guitar work, supported here by bass guitar (Dave Smith), keyboards (Rick Steff) and Steve Potts on drums. The arrangements are subtle, with lots of spaces between the notes and a warm, intimate character. The bass, drums and keys are often felt more than heard; sometimes the band sits out altogether, as on Dodge City.

And while MacLeod’s guitar work on A Soul to Claim isn’t strictly acoustic – he plugs in now and then – there are no instrumental fireworks. That’s because A Soul to Claim isn’t that sort of album. As is typical for MacLeod, the focus here is on his lyrics. MacLeod’s story-songs all have a point, and his liner notes helpfully provide the interested listener with some context and background. While he’s a lyricist possessed of a fertile imagination, MacLeod tends to draw upon real-life perspectives and experiences for his songs.

The title track is about overcoming addiction and the cycle of abuse. “Be What You Is” takes a lesson about authenticity from animals. “Where Are You?” addresses American society’s obligation to combat veterans. With its double-entendre title, “Dodge City” is a pointed number about politicians in our nation’s capital.

“Only Porter at the Station” is a metaphorical love song with some inspired turns of phrase. “Mud Island Morning” is an ode to MacLeod’s home on the Mississippi River. A wryly humorous number, “Dubb’s Talking Disappointment Blues” is a tale of what MacLeod calls his “lady trolling days,” but he includes a disclaimer suggesting that he might have embellished the story a bit for effect. Or not.

“Grease the Wheel” uses a well-worn phrase to make a simple point about taking charge of one’s own life. “Somewhere on a Mississippi Highway” draws from the same rascally well of inspiration as “Dubb’s Talking Disappointment Blues.” And for the record’s final track, MacLeod sets aside humor and delivers a heartfelt, hopeful song inspired by his son Jesse’s successful battle with melanoma. “No matter how dark things are for you,” he writes, referring to the song’s title, “remember, There is Always Love.” In the song itself, he speaks more than sings, doing so in a hushed whisper that draws the listener close.

But then most everything about A Soul to Claim – from its understated instrumentation to MacLeod’s insightful and incisive words – has that effect, warmly inviting the listener into the world of this masterful blues songwriter.