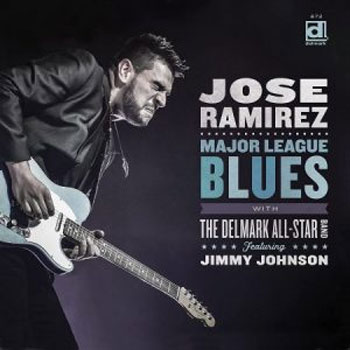 Jose Ramirez self-released his debut album, Here I Come, in 2020. The Costa Rican guitarist quickly drew positive notices for that release, capped by a Blues Music Award nomination. With his band he took second place at the Intentional Blues Challenge. Navigating through the pandemic-stricken globe, he managed a successful tour through Portugal, Spain, Germany, Switzerland Belgium and the Netherlands in late 2021. And in February through March 2022 he toured across the Eastern half of the United States; a second leg with more dates on the Eastern seaboard commenced in April.

Along the way, he inked a deal with Chicago-based blues label Delmark, cutting his second album. Its title is a nod to Ramirez’s ascendancy from journeyman guitarist to high-profile act: Major League Blues.

While Anson Funderburgh’s expert production gave Here I Come a polished character, Ramirez’s partially self-produced Major League Blues has a more intimate vibe. The instrumentation is vastly sparer – almost like a demo recording – the effect of which is to bring Ramirez’s vocals and guitar into sharper focus. His clean and assured licks coexist seamlessly with his everyman singing. And though he’s still a rising star, Ramirez is comfortable sharing the spotlight on the opening (title) track with guitarist Jimmy Johnson.

Ramirez is also confident enough not to go full-throttle all the time on Major League Blues. The album’s second track slows things way down for the smoky romantic blues of “I Saw it Coming.” With shades of Bobby “Blue” Bland, the track underscores Ramirez’s understanding of (and appreciation for) soul and r&b. Roosevelt Purifoy’s extended organ solo brings a gospel feel to the track, and the cavernous ambiance of Ramirez’s solo on “I Saw it Coming” wrings every bit of emotion out of the guitar.

The loping “Bad Boy” helps emphasize Ramirez’s command of blues’ many sub-styles. A haunting number, “My Love is Your Love” is a slow burner. Ramirez leans into long, sustained notes and subtle, glistening chording on “Whatever She Wants.” Midway through – between organ and guitar solos – the arrangement switches to a stuttering beat before settling back into its core groove.

Some well-placed ambient sounds add character and mystery to the stomping “Here in the Delta.” As its title suggests, “Forbidden Funk” inches toward the edges of the blues idiom, and features some tricky percussion work from Antonio Reyes. Kenny Watson Jr. provides solid, kinetic basswork that rarely calls attention to itself; a close listen reveals its inventiveness.

Ramirez’s Latin American roots aren’t always obvious in his songwriting, arrangement or approach to his instrument. But that character is front and center on “Are We Really Different”; the track is strongly reminiscent of Santana’s work.

Beyond Ramirez’s singing and playing, the most prominent component of Major League Blues is the keyboard; it figures significantly into all ten of the album’s tracks. Even when used subtly – as on “Gotta Let You Go” – those keyboards greatly inform the character of the record.

Ramirez closes his major label debut album with a thoughtful, gospel-flavored blues ballad, “After All This Time.” Shelly Bonet’s brief and bravura guest vocal break takes the song to another level. Eschewing the guitar fireworks that characterize many young players, with Major League Blues Jose Ramirez displays calm, assured confidence and a mastery of his instrument.