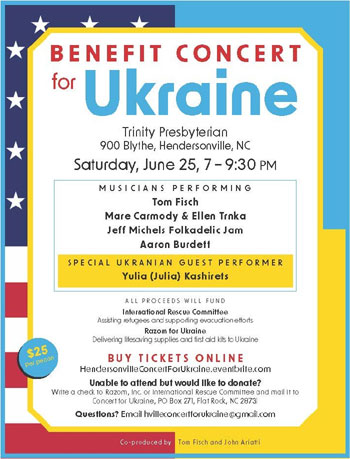 Horrified by Russian aggression in Eastern Europe and inspired by the fortitude and determination of the Ukranian people, two Western North Carolina residents looked for a way to provide some support to the besieged people of the Ukraine. John Ariaitti and musician friend Tom Fisch teamed up to stage a Benefit Concert for Ukraine on June 25 at Trinity Presbyterian. The concert will feature local talent led by Fisch plus Mare Carmody, Ellen Trnka, Aaron Burdett and Jeff Michel’s Folkadelic Jam. With a set that includes topical songs, Michel is a believer is music’s power to effect change, to be a force for good in the world. “I think that songwriters especially have the power to be philosophers, if that’s the right term,” he says.

All performers donated their time and talent. A special addition to the event is Ukraine-born Yukia (Julia) Kashirets, who was scheduled to sing her home country’s national anthem. Yulia, who recently sang the Ukraine National Anthem at the USTA Billie Jean King Cup, moved to Western North Carolina in 2015. She lives in Flat Rock with her husband and daughter.

What are your favorite kinds of songs to sing?
Yulia Kashirets: I love to sing Ukrainian songs. It’s [awkward] to sing in English, because people can still hear my accent. I am attached to Ukraine, to that language, to those traditions, to that culture.

Do you still have family in Ukraine?
Yulia Kashirets: Yes, and [that’s] the hardest part. My brother is a soldier, and he is defending the country since the second day of the war. That’s very personal and heartbreaking. I can contact him; sometimes he disappears for five days. I know [the army] is doing something and he cannot be available. We discuss everything, but if I don’t hear from him [for] seven days, I am going to contact his commanders. Sometimes he just tells me, ‘I’m fine and I love you.’ But nothing specific; they cannot tell the details.

What led you to put together this benefit concert?
John Ariatti: I was really upset seeing the TV news showing women, children and others being killed. The Ukrainians have shown great courage in their fight against Russia to retain their independence. Later I learned that the painter and tile setter for my new house – people I know – are both Ukrainians and have families still in Ukraine. The horror of this war suddenly jumped out of the screen and into my life. It became real and personal. Tom Fisch is a friend and neighbor; we both wished we could help in some way. We thought of a concert and wondered if anyone in Hendersonville was planning on producing one. Tom said he didn’t know of any, so I said, “Okay, let’s do it!”

What is your fundraising goal?
John Ariatti: A minimum of $100,000, but Tom and I are hoping we’ll exceed that amount. All proceeds will go to the International Rescue Committee and to Razom. Razom – which means “together” in Ukrainian – is working with volunteers and partners in the U.S., Poland and Ukraine to address the emergency medical needs of people in Ukraine. Their focus is on getting tactical medical kits to the people who need them. They are also providing certain non-medical supplies that enable the distribution of the aid through accurate communication and navigation.

If people are unable to attend the concert but still wish to help/donate, what can they do?
John Ariatti: They can write a check to one of the two charities – International Rescue Committee or Razom – and mail it to Concert for Ukraine, PO Box 271, Flat Rock, NC 28731.

What would you like people to know about the conflict in Ukraine?
Yulia Kashirets: I think the whole world now knows what is happening. There are two countries; one of them started the war against the other. They came to our land and started to kill, to do terrible things. Our people don’t have another choice [other] than to protect themselves, their homeland, their family and children. It was a hard decision for a lot of people to leave the country, or to leave specific areas in Ukraine.