Music to Your Ears: ELP’s ‘Trilogy’ 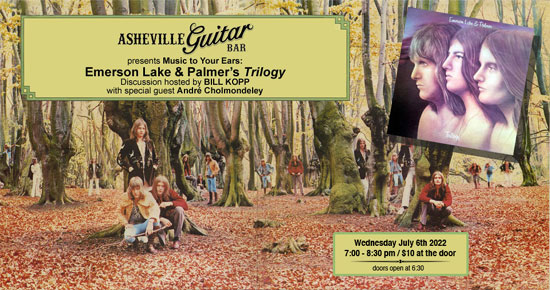 One of progressive rock’s leading lights as well as one of its first supergroups, Emerson Lake & Palmer exploded onto the music scene with “Lucky Man,” the hit single from their self-titled debut album. Featuring the virtuoso keyboard work of pianist Keith Emerson, the group also pioneered use of the Moog synthesizer, a then-new instrument developed by Dr. Robert A. Moog (later of my current hometown, Asheville NC).

Emerson Lake & Palmer enjoyed a successful and high-profile run through most of the 1970s, but arguably their creative pinnacle was their fourth release, 1972’s Trilogy. Featuring a deft balance of both the band’s ambitious “prog” sensibility (including classical music themes) and a strong melodic approach (in the form of catchy singles like “From the Beginning”), Trilogy is simultaneously the band’s most stylistic varied record and its most accessible.

Released in a banner year for music – one that included some of the best-ever albums from David Bowie, the Moody Blues, Lou Reed and countless others – Trilogy made the point that progressive music could appeal to a wide audience.

If you’re in or near Asheville on Wednesday, July 6, join me for an evening of music and discussion as we take a deep dive into ELP’s Trilogy. With special guest André Cholmondeley (crew and instrument technician for Emerson Lake & Palmer and for solo tours by both Greg Lake and Carl Palmer), we’ll explore Trilogy and gain an understanding of its place in musical history.

On separate occasions over the years, I’ve had the pleasure of meeting and interviewing Keith Emerson, Greg Lake and Carl Palmer.

The event is the latest installment of Music to Your Ears. MTYE is my monthly discussion series hosted by Asheville Guitar Bar and co-sponsored by AshevilleFM. On the first Wednesday of each month, music enthusiasts gather to discuss an important album, artist or musical movement. An interactive evening, Music to Your Ears isn’t a lecture; it’s a discussion led by experts and designed to enrich the listening experience.