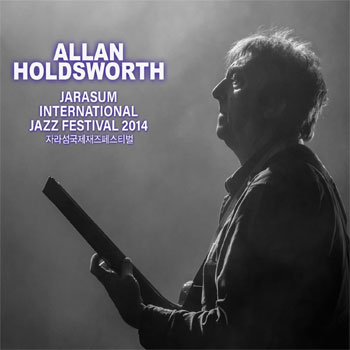 “In the moment.” That’s one of the phrases bassist Jimmy Haslip employs in his brief liner note essay for this, the latest in the ongoing series of archival live Allan Holdsworth performance releases. This set documents a concert in Gapyeong-gun, South Korea. The show was the final stop on a two-week pan-Pacific tour that included dates in New York City, Boston and Japan as well. The Jarasum Festival was the last stop for the trio of Holdsworth, Haslip and (on drums) Gary Husband.

The set list is as varied as fans would have come to expect from Holdsworth, with old favorites (“Water on the Brain” from 1983’s Road Games, “Devil Take the Hindmost” from 1985’s Metal Fatigue) and more recent compositions (the opening cut, “Texas,” which appeared on 2000’s The Sixteen Men of Tain. The misleadingly-titled “Gas Lamp Blues” – okay, the loping piece is as close to the blues has Holdsworth would get – first appeared on 2002’s All Night Wrong, the guitarist’s first official live album (there have been many, many, many since then, of course, albeit with a different “rhythm” section.

When it comes to the work of Allan Holdsworth, the term rhythm section simply doesn’t apply. No power trio chugging riffs for this endlessly exploratory and virtuosic instrumentalist; it’s a trio of equals, with each musicians commanding his tools. The music is adventurous and just this side of improvisational (okay, maybe just that side of it) and even the drums solos are intriguing. The subtle and atmospheric “Above and Below” showcases Holdsworth’s brand of soundscaping. It was a cold night (as Holdsworth remarks to the audience after the opening number) and the trio was dealing with the deleterious effects of jet lag. But save for the guitarist’s comment, you’d never know. They’re molten metal prog jazz fusioneers here.

The audio quality is absolutely top-notch – the set was recorded in high definition – and the video included on an accompanying DVD is swell also.