21st Century Lit: A Chat with A. Jay Popoff

Lit seemed to have roared – fully formed and developed – out of the Orange County punk and hardcore scene of the mid-’90s. But the band’s roots go back farther, and they go deeper as well. Founded by brothers Jeremy and A. Jay Popoff, the group grew out of two earlier bands, Razzle (with A. Jay on drums) and five-piece Stain; the latter evolved into Lit by 1995. Lit established their place as a popular live act and – with the release of 1999’s A Place in the Sun – a hit-making outfit. In the more than two decades since, Lit has weathered setbacks and navigated tricky course corrections. Their latest album, Tastes Like Gold is being hailed as return to form; it’s their strongest offering in years. Fresh off a UK tour with Bowling for Soup, Lit lead singer A. Jay Popoff sat down for a career-spanning conversation. 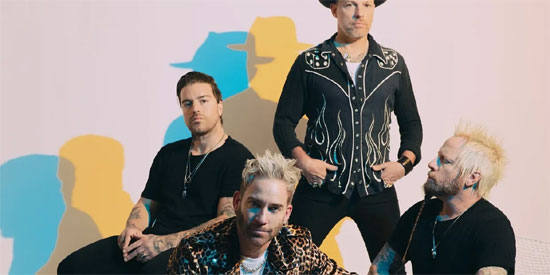 You guys came up as young players with the Orange County music scene as kind of a backdrop. How much did that that that scene influence the sound and character of the band?

A. Jay Popoff: Coming up, we were pretty isolated from any other sort of music scene. Before we took on the Lit sound as people know it today, we started as a little more of a Sunset Strip kind of “hair band.” That was our School of Rock. We booked all our shows at all-age venues there like The Roxy, the Whisky, Gazzarri’s, and the Troubadour. We spent a lot of time banging it out and “building our brand.” So Orange County wasn’t really a big influence other than the obvious things: the sunshine, skateboarding and the beach brought a little brightness to our sound.

You started out as a drummer. How does that foundation affect your approach to vocals?
I’ve heard from engineers in the studio that I have a unique timing with my phrasing. I think that’s got to come from my backbone as a drummer. I tend to lay a little lazy on my vocal just behind the beat. A lot of singers don’t pay attention to timing as much as I do.

Have you always known that playing in a band is what you wanted to do with your life?

Our dad took us to see out first concert, Iron Maiden, when I was 8 years old and Jeremy was 10. It was life-changing: the amount of people in the crowd, and the energy from the stage. We were hooked.

Even on Lit’s earliest releases like Tripping the Light Fantastic, you were combining thrash, metal and hardcore influences. But there was high value placed on melody. Was it a conscious and deliberate part of the band’s approach from the very beginning to make music that was catchy?
Yeah; our influences stem from all over the place. Our grandfather was a jazz musician; when we’d spend weekends at our grandparents house, we were always hearing all the standards. And our dad was a deejay; he worked in pop radio for a long, long time at KIIS-FM in Los Angeles. So he was always music bringing home. And at the time, pop music wasn’t necessarily what it is today. You’d hear Def Leppard, Bon Jovi Michael Jackson and Dolly Parton on the same radio station. It’s the hooks that bring people in, so that’s always been really important to us; pop was a big influence in our upbringing and as songwriters.

On one hand, it’s hard to argue with success: three of Lit’s best known songs are from 1999’s platinum-selling A Place in the Sun. But some critics weren’t as enthusiastic. What are your thoughts on the apparent disconnect between commercial and critical success?

Any time your growth is happening in the public eye, it’s no different than if you watch a kid go through high school and then go off to college. And I feel that musically, that’s what happened. Our music has been constantly changing from the time I was 14 through to today. I think that Tripping the Light Fantastic was a little bit of the growing process captured onto tape.

Coming out of a difficult period that included your stepfather’s motorcycle crash and the loss of drummer Allen Shellenberger, the band really rallied and came back with The View from the Bottom. And it was successful on many levels. Did hardship re-energize the band creatively?
It definitely put a halt on everything that was Lit as a band; we were definitely put to the test during that time. We weren’t even sure we were going to continue as a band. But we came together as human beings and brothers; we mourned together and went through difficult days together.

It might have been Big Al looking over us and sending us these messages, but we all realized, “We need to get back to this. Big Al would be bummed to hear that we weren’t going to continue.’” Nathan Walker came in and took the torch from Al; he had been close with Al and drum teched for him for a while. It was inspiring to feel that wave of, “Hey, this is okay,” and “We need to do this for Big Al.” And it brought a lot of songs. It was good therapy for us to continue on.

In the context of Lit’s overall sound, the country music character of 2017’s These Are the Days is mystifying. What were you thinking?

That album is a product of our introduction to the Nashville songwriting world. Jeremy, came over a few years before I did, and he had such a great experience in some of these writer’s rooms, working with next-level talent. I resisted: “If it ain’t broke, don’t fix it.” Finally, he talked me into coming over and, after that first time, it clicked. It lit a fire under our asses and turned me on to country music; I wasn’t a fan of it before that. And for selfish reasons we wanted to record the songs we wrote instead of some other artist cutting them. In retrospect, it probably should have been The Popoff Brothers instead of Lit; that’s something that we realized a little later. We want to continue writing those country-infused rock songs, but we’ll keep it separate from Lit, because that’s really the wrong energy for our band.

Tastes Like Gold has a character more in line with your best work. And you’ve been previewing songs from the new record in your live shows. How has it been getting back on stage in front of fans?

It’s a great time not only for music fans, but for the band. My favorite thing is getting on stage, and playing these songs live couldn’t have come at a better time. The crowd loves the new music, and it shows. The reception is very similar to when we first started going out on tour and playing the A Place in the Sun songs. I know that pretty much every artist says, ‘This is our best record yet.” But we strongly feel that way. And to have that validation from our true fans feels good.