Album Review: Bill Evans – You Must Believe in Spring 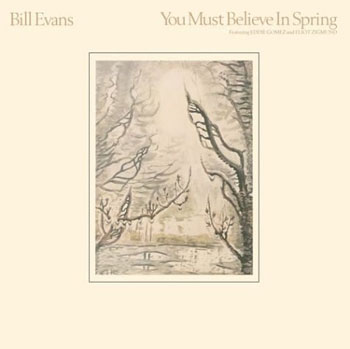 Bill Evans was a prolific as he was gifted. In the course of his short life, Evans released more than 50 albums, and contributed his piano talents to at least as many releases by other artists. He died in September 1980, and shortly after his passing, a new album appeared. Recorded in 1977, You Must Believe in Spring marked the last time Evans would record with longtime collaborator Eddie Gomez on bass.

It’s among Evan’s most tuneful outings, with his sparkling piano work, Gomez’s inventive and assertive (yet somehow subtle) upright bass, and drummer Eliot Zigmund’s sympathetic brushwork all contributing to an appealing whole. The melancholy character that suffuses much of Evan’s music is on display here, but there are upbeat melodies as well. His playing here – as always – channels the pianist’s personal emotional pain in a way that came out as beauty. Underscoring that is the trio’s cover of Johnny Mandel’s Theme from M*A*S*H, “Suicide is Painless,” dedicated to both Evans’ brother and common-law partner, both of whom had committed suicide. Nearly all of the songs on the album make their first appearance on a Bill Evans release here. Taken as a whole, the music on You Must Believe in Spring – a concept album, liner notes author Marc Myers asserts – are meditative and introspective.

The album received CD reissues in 1990 and 2003, but wouldn’t appear on vinyl after its original release until a 2014 Europe-only release. Earlier digital-format reissues appended a few bonus tracks, but a new Craft Recordings vinyl reissue takes the album back to its original seven tracks. For maximum fidelity, this heavyweight vinyl reissue splits the songs across two LPs, both designed for play a 45 r.p.m. rather than 33-1/3. The gatefold package features color photos as well as an informative 2021 essay by jazz journalist Myers, drawing on interviews with producer Tommy LiPuma.