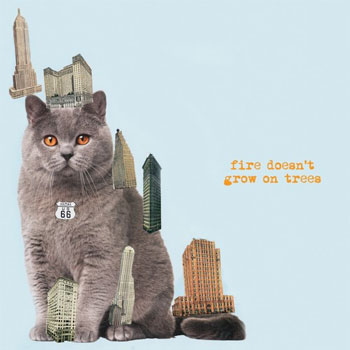 One might say that there are two very different sides to the Brian Jonestown Massacre. In person, live and onstage, the band defines erratic. At its best, a BJM concert is transcendent, life affirming and deeply engaging. At its worst, it’s a mess, with concertgoers witness to onstage arguments, endless technical problems, interminable guitar tuning and shambolic, dissolute performances. The problem is that the latter is a much more common occurrence than the former. And for that reason, I will not be reporting on my recent attendance at at BJM show. Let’s just confirm that – unlike many of my fellow concertgoers – I was there from the band’s first note to their last.

Yet there’s another Brian Jonestown Massacre, and it’s that one that has earned the group led by Anton Newcombe a reputation as one of the best modern-day exponents of psychedelic rock. Their 20th album, Fire Doesn’t Grow on Trees, is slated for release in June, but thanks to a kind publicist I’ve been able to spend time with it ahead of official release.

And to (finally) get right to the point, if you dig what BJM is about, you’ll luxuriate in this new album (their first of two scheduled for release in 2022). Few bands can do as much with as little as one or two chords. The droning approach of tunes like “Ineffable Mindfuck” draws the listener into BJM’s psychedelic world. The arrangements are densely layered, and – as the band’s name has long implied – the spirit of The Rolling Stones’ Their Satanic Majesties Request is never far from what’s happening. Newcombe seems to come up with catchy melodic lines at will, and each of the dreamy, insistent, throbbing and gauzy songs has at its core at least one of those.

Which means that as shoegazey as the band can get, there’s always a rock-solid musical idea at each song’s core. “It’s About Being Free Really” has a la-la-la kind of singalong quality, with backward electric guitar lines fluttering in and out of the mix while acoustic guitars are feverishly strummed.

Newcombe’s impish sense of humor might not reveal itself onstage with any kind of regularity, but on record, it’s front and center. “Wait a Minute (2:30 to be exact)” is typical of his approach. But the hypnotic, draw-you-in character of songs like “What’s in a Name?” is BJM’s true stock in trade. Instruments buried deep in the mix – like that song’s trilling combo organ – are more felt than heard, but Newcombe knows a lot about subtlety.

Even when the band heads in a strung-out, druggy direction – as with the first half of the dirge-like “Before and Afterland” – they do so in appealing fashion. Most of the time, BJM traffics in its style without sounding retro. And when they don’t, they create effective pastiches of bad-trip ‘60s psychedelia like “You Think I’m Joking?”

Standing in sharp contrast to the band’s onstage demeanor, there’s a breathtaking level of quality control in Brian Jonestown Massacre’s body of recorded works. Even the slighter songs never feel like filler; each justifies its existence. If psychedelically-oriented jangle rock is your thing, you can safely purchase most any BJM album and be assured of a rewarding listening experience. Early in the band’s career, few would have predicted that the word consistent would apply to their output. But across 20-plus albums in 30-plus years, Anton Newcombe and his (occasionally) merry band of musicians have displayed just that: a consistent ability to deliver on the promise of their chosen concept. And Fire Doesn’t Grow on Trees is another winner.

NOTE: I interviewed Anton Newcombe a very, very long time ago. Here’s that story. And — from even longer ago — here’s even more BJM-related writing.