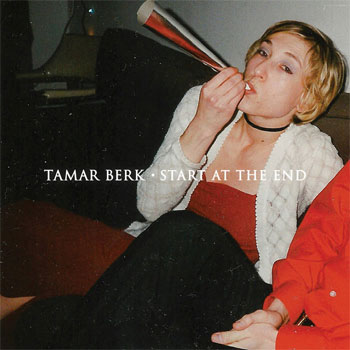 Until very recently, Tamar Berk was one of those artists with whom I was only vaguely familiar. Her name has been bandied about by those whose tastes I admire and respect, but beyond seeing her image in onscreen previews of those Facebook “reels,” I had somehow never managed to hear any of her music.

I now know that I was missing out by not exploring Berk’s body of work. Long before she began a career as a solo artist, Berk fronted Starball, a Chicago melodic rock band responsible for a superb album, 2001’s Superfans. Based these days in L.A., she’s been quite busy of late: in 2021 Berk released The Restless Dreams of Youth, following it up quickly with Start at the End.

With a spare but finely-tuned arrangement aesthetic, the songs on Start at the End follow on closely with the approach Berk employed in Starball. Her sharp melodic sense is wedded to savvy, intelligent and emotionally-charged lyrics. Excellent playing puts the emphasis on sonics that support the overall song; there’s plenty of spaces between the notes. Berk’s style bears hints of Harry Nilsson, and her Chicago background comes through in the tough, no-nonsense rock foundation of her songs.

Berk’s vocal range is impressive, and she uses it to great effect. Again it’s about serving the song; she doesn’t traffic in vocal acrobatics, but one comes away with the sense that – should she want to – she certainly could. Berk’s vocals shift effortlessly from a near-whisper to as assertive (yet still eminently pleasing and melodic) full-on approach in tunes like “Tragic Endings,” a highlight among the thirteen uniformly excellent and hooky tracks on Start at the End.

The lyrics concern themselves with grown-up matters: “Hoping This Day Won’t Kill Us” is a handy example. And while the songs have a personal quality, Berk crafts them in a manner that gives the songs a universality. Listeners will easily find themselves in Berk’s words. Made at a difficult time during which Berk suffered the loss of her father, the album is emotionally resonant.

“June Lake” folds in some lovely synthesized string parts and some carefully-layered vocals, but by and large the approach on Start at the End is a tasty kind of meat-and-potatoes rock characterized by guitar/bass/drums with some sparkling piano and Wurlitzer work from Berk herself.

The uptempo rocker “Real Bad Day” is reminiscent of Katrina and the Waves, but with a harder edge that makes the song even more effective. “No Chair” is melancholy, Left Banke-flavored chamber pop. The delightful “Dandelions in my Flowerbed” is chiming powerpop with peppy hand claps and a soaring vibe; it’s also the song off Start at the End that I would have chosen as a single.

As skilled a rocker as Berk clearly is, perhaps the most fully-realized piece on the album is a work of crystalline subtlety and texture, “Sweet Relief.” In the song’s four and half minutes, Berk showcases most all of her musical virtues: vocals, songwriting, arrangement and so on. Its an alluringly memorable tune that’s likely to stick in the listener’s memory.

But then that observation could just as well be applied to most every cut on this album. Berk ends as strong as she starts, with the rousing, anthemic “This is Me Trying.” It’s much more than that: it’s Tamar Berk succeeding.

Note: The online info regarding the vinyl LP notes that the record is pressed in random colors. Mine’s black. And it now occupies a prized spot on my shelf, right next to Don Berkoski.