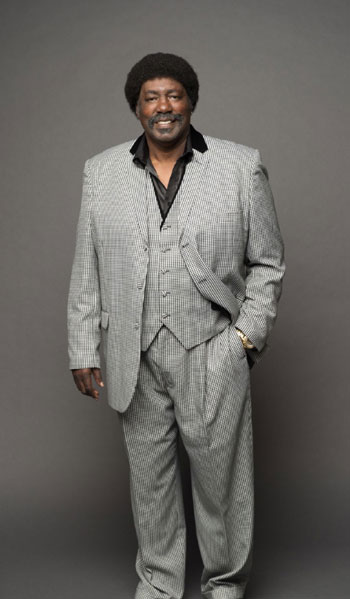 The life of a touring musician is perilous enough: the general hazards of the road make everyday existence a constant challenge. Add to that the threat of war, and it’s enough to rattle the nerves of even the most road-hardened artist. Popular and award-winning Bay Area bluesman JC Smith knows all this firsthand: he was on tour in Russia earlier this year when that country launched its war of aggression upon Ukraine. Honoring his commitment to his fans, he stuck around for additional show dates. When things got too hot, he made the difficult decision to come home. He almost didn’t get out of Russia. Once he got home, he began putting together a benefit concert to help the people of Ukraine. Yellow & Blues: A Benefit for Ukraine happened onstage and via livestreaming Saturday, April 30 at the Tabard Theatre in San Jose.

Smith was no newcomer to Russia; the tour was his tenth there in as many years. And he didn’t sense danger ahead of time. “There were undertones of the war possibly happening,” he says, “but nobody expected it to really go down.” In Moscow a week into his tour, he met his keyboard player for breakfast and found her crying. “She said that the invasion had happened,” Smith explains. Everyone he spoke to voiced their opposition to Vladimir Putin’s attack on the neighboring country.

The band set off from Moscow for the 1100-mile journey to Yekaterinburg, a city on the Siberian frontier. “By the time we got there, [the war] was full on,” he says. A groundswell of opposition to Putin’s war came face-to-face with the government’s severe crackdown on dissent; thousands of Russian civilians were arrested. And lines of communication to the outside world were coming down. “There was no anti-American sentiment, Smith emphasizes. “But things like Facebook started shutting down there. People started getting really scared.”

With the news blackout in Russia, Smith didn’t know the true scope of the conflagration in Ukraine. He got word that a dozen or more countries were prohibiting flights from Russia, but was confident he could find a way out when the time came. At one point he got a call through to his wife, asking her about the official word from the U.S. State Department. He laughs now when he recalls her reply: “You shouldn’t have went there in the first place!” Halfway through the tour, he made the decision to leave.

Smith’s wife booked him on five different flights, but all were canceled. Eventually he found one – $2800 for an economy seat – but it required a 20-hour train journey just to get to the airport. Friends presented him with an upgraded fare for the train, and saw him off from the depot. And the sentiment they shared was one he heard again and again: “We’re not in favor of this war.”

“It got really sad for me, knowing that I may never see any of these people – fans and really, really good friends – again,” Smith says. One friend asked him if he was able to collect his earnings from the aborted tour; Smith said no. He was advised not to worry about it. “The ruble just got devalued to under a penny,” he was told.

But Smith did have about $200 worth of rubles in hand, thanks to merch table CD sales. So with a few hours left before his flight, he told his Russian friends, “Boys, we’re going to have a good time today.” He bought them full slabs of ribs, chicken wings and as much wine as they wanted. “Then we went outside and had a couple of cigars,” he recalls with emotion. “We just took time to be together, and we tried not to be sad about it.”

Smith made it on board one of the last flights between Russia and the U.S. Once home, he got to work organizing a concert to help those in Ukraine. Yellow and Blues: A Benefit for Ukraine featured the JC Smith Band plus Legally Blue, Robert Berry and Rome Yamilov.

Smith hand-picked all of the performers. “I wanted [artists] who really wanted to be there to be there,” he says. A full 100% of the proceeds go to international nonprofit Doctors Without Borders and its efforts in Ukraine. “And if people want to donate and not come to the show, they can do that, too,” he adds. “Blues music can be a vehicle to celebrate, or to pull you out of [bad] things.” With the benefit concert, it will serve both of those purposes.