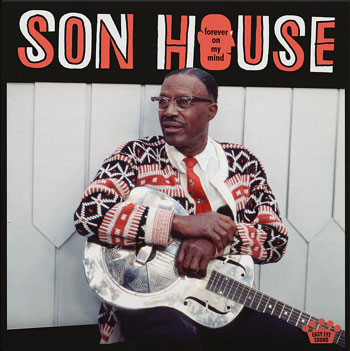 An acclaimed Delta blues singer and guitarist, Son House earned significant praise during his lifetime. His work was chronicled on a series of 78 rpm records, on recordings made both for the U.S. Library of Congress and Fisk University, and on more than 20 albums released during his lifetime. His slide guitar work on his resonator guitar was distinctive.

This new collection of previously-unheard material dates from 1964, and comes from the collection of Dick Waterman, Hose’s manager. Sourced from the original quarter-inch analog tapes and carefully restored by the team at Easy Eye Sound, Forever on My Mind features eight songs.

The new album represents the earliest recordings of House from the period of his “rediscovery” by Waterman. Five of its eight track would appear on his 1967 major-label debut, The Legendary Son House: Father if Folk Blues, released by Columbia in 1965. The title number has never been heard in a studio recording until now.

The recordings are pristine, and spare in the extreme. Only House’s guitar and voice occupy the sonic space. The readings are all professionally executed, and tracks like “Empire State Express” illustrate just how much of an influence House would come to exert on other artists (specifically Jimmy Page on Led Zeppelin’s third album). Some of the songs are rough and ready; others are a bit more nuanced. Throughout, House display the passion and command of his instrument that helped make his an important name in blues history.

The album is available on black or orange marble vinyl; this coverage is based on a review copy on CD. For those so inclined and financially able, test pressing vinyl records (autographed by producer Dan Auerbach) are available at a premium price as well.