’90s hitmakers learn from experience and build on successes

In the life of a rock band, ups and downs are inevitable. High expectations are often placed on a band when it scores a monster hit with its debut. And if subsequent albums don’t measure up, both the business and the listening public can lose interest. Often, that spells the end for a group. But Candlebox endured those peaks and valleys, took some time off to grow up and improve, and returned stronger than ever. With a healthy second wind, the Seattle group has been on a creative winning streak that’s entering its 15th year. Candlebox is currently touring in support of Wolves, its sixth album of new material.

Candlebox came out of the Pacific Northwest in the early 1990s, a time when grunge rock was in its ascendancy. Bands like Green River and Alice in Chains were beginning to gain a foothold outside the region, and Pearl Jam, Nirvana, Soundgarden and others wouldn’t be far behind. But Candlebox would stand somewhat apart from their Northwest compatriots; their sound wasn’t as deeply rooted in the then-trendy grunge style. 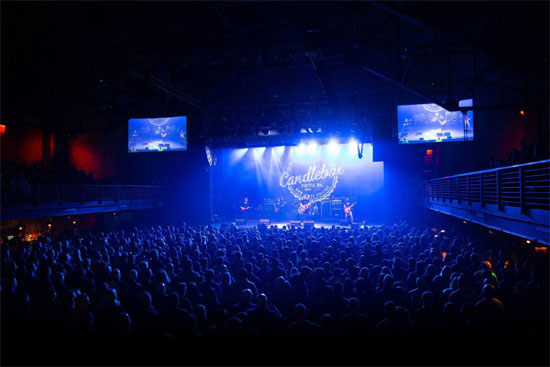 “We were younger than the guys in Alice in Chains and Pearl Jam and Soundgarden,” says Candlebox lead singer and founding member Kevin Martin. “We didn’t grow up in that [musical] community.” He says that from the band’s start, Candlebox drew more influence from blues-based rock ‘n’ roll of groups like The Who, Aerosmith and Led Zeppelin.

But Martin and his bandmates weren’t isolated from alternative rock. He recalls his older sister turning him on to bands like The Clash and Blondie when he was all of six years old. “I grew up in San Antonio,” he says. “There was a great punk movement going on there from 1978 all the way to about ‘86.” When his family moved to Seattle in the mid ‘80s, Martin brought that background with him.

And he was surprised by what he found. He says that the Seattle scene of that time “was so different. It was more inspired by the tuned-down, Black Sabbath dark side of rock ‘n’ roll.” When he and three other musicians formed Candlebox in 1990, they followed a path that was informed by punk but with a firm foundation in the melodic side of things. “We didn’t really connect with Seattle early on,” he admits.

Candlebox self-financed the recording of an EP, The Red Demo Tape. “It cost us five grand,” Martin recalls. And be believes that the comparatively raw recording is a true document of the band’s sound at that point. “We were firing on all cylinders then,” he says. In the space of a 12-hour “lock-in” session, the band cut eight songs, including vocal overdubs and mixing. “Two of the songs didn’t even have finished lyrics,” he notes. He completed the lyrics during that session.

Things took off quickly for Candlebox when the band was signed by Maverick Records, a brand-new label co-founded by Madonna. “We were the first band they signed,” Martin says. It was a successful alliance. “They got lucky with us, and we with them,” Martin observes. The runaway success of Candlebox’s self-titled debut album in 1993 paved the way for Maverick to sign other up-and-coming artists like Alanis Morissette and The Deftones.

And Maverick took a hands-off approach to the music, allowing Candlebox to make music the way they wanted to. The 4X Platinum-selling album spawned two hit singles, “You” and “Far Behind.” Music videos for those tracks plus “Change” were popular on MTV as well. Martin says that he was thrilled at the band’s success, but admits that he saw it coming. “We knew that if the songs were given the chance and there was an opportunity for people to hear them, they would take us where we wanted to go: to have a career and be a touring band.”