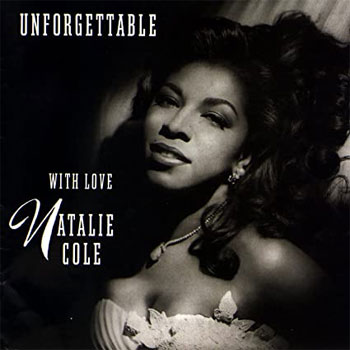 By the early 1990s, Natalie Cole was anything but a newcomer to the music world. Daughter of legendary Nat “King” Cole, she had long since established herself as an R&B/soul vocalist, and had racked up an impressive string of hit singles and well-received albums. Always reluctant to ride upon the coattails of her father – and not wishing to be perceived as doing so – she avoided jazz vocal work. But for her 11th solo album, Cole made the decision to switch gears, recording an album of jazz standards.

It was a momentous decision. The resulting album, Unforgettable…With Love was a monster success. Very much in a traditional vein, it finds Cole backed variously by a full big band or compact jazz ensemble, alternatively crooning and belting out a well-chosen set of songs from the Great American Songbook.

Unforgettable…With Love was wholly out of step with what was happening in music in 1991. But there was precedent for Cole’s major shift in musical direction: Linda Ronstadt had skillfully executed a stylistic left-turn of her own more than seven years earlier, leaving behind the comparatively edgy pop of Get Closer for a pair of jazz standards LPs, 1984’s Lush Life and For Sentimental Reasons in 1986. While neither of those releases soared to the top of the album charts as her previous works had done, they performed well and helped establish Ronstadt as a musical force of great versatility.

Those Ronstadt albums also served notice that a market for jazz vocal standards still existed. So in an era that also saw the release of Nirvana’s Nevermind, Pearl Jam’s Ten, R.E.M.’s Out of Time and U2’s Achtung Baby, Natalie Cole recorded a set of 22 songs in an unabashedly classic/retro style.

These weren’t randomly selected tunes, either. Each of the 22 tracks on Unforgettable…With Love was already closely associated with her late father. And while Natalie Cole’s readings of these songs are indeed classic, they don’t always feature arrangements that closely follow Nat’s.

Natalie was 15 when her father had passed, and had already initiated a career as a singer. And her father’s songs remained a prominent part of the musical lexicon when she reached adulthood. The readings of these songs demonstrate Natalie Cole’s deep understanding of the material; she sounds completely natural singing “L-O-V-E” and a medley that includes “For Sentimental Reasons,” “Tenderly” and “Autumn Leaves.”

The arrangements are note-perfect, demonstrating a deft balance between delivering instrumental thrills and providing a sympathetic backing for Cole’s spirited vocals. She handles scat vocals with ease, and digs into the sultry and emotional content of the lyrics (witness “Smile” for proof).

As wonderful an album as it is, Unforgettable…With Love would come to be remembered most for a somewhat controversial closing track. Even though Nat “King Cole” had passed away many years before, the record features a duet between him and his daughter. Similar in concept to an approach The Beatles would employ just a few years later, “Unforgettable” combines an existing vocal track with new instrumental backing and additional vocals from Cole’s daughter.

But unlike “Free as a Bird,” the duet version of “Unforgettable” doesn’t work from a crude demo; Nat’s vocal performance is a crystalline studio recording. And it’s worth noting that in 1991, the technology used to fuse old and new was somewhat revolutionary.

Cole (as well as producer David Foster and executive producer Tommy LiPuma) were rewarded for their effort when the duet/remake soared to the #3 spot on Billboard’s Adult Contemporary chart. The album itself fared even better, hitting the top spot on both the Billboard 200 and jazz album charts. The album would eventually sell in excess of seven million copies in the U.S. alone; it did proportionately as well in a dozen other countries across the globe. And Unforgettable…With Love served to rejuvenate and realign Natalie’s career; her subsequent albums continued to explore jazz alongside other styles.

And on her 1996 album Stardust, she again duetted with her late father, this time on “When I Fall in Love.” That song was a hit as well, earning Cole a Grammy award for Best Pop Collaboration with Vocals. Cole’s wide-screen approach to making music would continue for the rest of her career, with a run that featured no less than three Christmas-themed records and one in Spanish. Her untimely death in 2015 at the age of 65 cut short a career that seemingly still had much to offer.

In observance of the album’s 30th anniversary, Unforgettable…With Love has received a reissue that includes a pair of b-sides not originally on the album, “At Last” and “Cottage for Sale.”