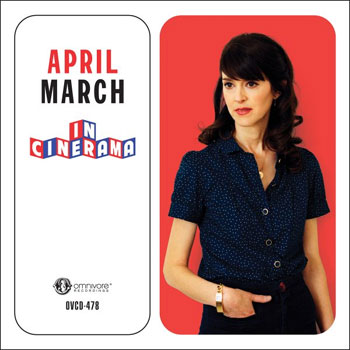 I’ve written often (and recently) about Francophone pop of the ‘60s and the way in which its wonderfully insular vibe yielded some wonderfully interesting and durable music. The yé-yé approach – found in the music of Sylvie Vartan, Françoise Hardy and other chanteuses – drew from Anglophone (mostly UK and American) pop, recasting it in a style that was unmistakably French.

One might not expect that such a narrowly-focused slice of the pop music landscape could serve as inspiration (or even template) in 2022. Ah, but life is full of surprises. The Los Angeles-based (and suspiciously-named) April March makes timeless and out-of-time pop music of the highest order. In Cinerama is mostly sung in English, but the fingerprints of French pop are all over the album.

For a slightly more modern point of reference, consider this: April March’s musical aesthetic isn’t miles away from that of quirky Japanese retro-poppers Pizzicato Five. Though March’s style is infinitely more organic, she shares with that mischievously playful outfit a deep appreciation for the unabashedly old-school songcraft and arrangements of yesteryear.

There’s almost nothing about the album that identifies it as the product of a 21st century artist. Perhaps the crystalline production hints in that direction, but the arrangements – lush, creamy strings, shimmering guitar, outrageously tasteful drumming – are from another time indeed.

But focusing upon the arrangements and sonic character of the album threatens to give short shrift to the songs themselves. And that would be unfair; March (known alternatively in her role as author and illustrator Elinor Blake) and co-writer (and producer) Mehdi Zannad have crafted a winning set of 13 winsome, fetching pop gems.

The team assisting March in her efforts is peerless; the Beach Boys connection is represented by the presence of both Marilyn Wilson-Rutherford (The Honeys, American Spring, and the ex Mrs. Brian Wilson) and Andy Paley. Sisters Petra and Rachel Haden help out on backing vocals. And the album title seems a subtle nod to the undeniably cinematic quality of the music; the songs often remind this listener of the delicious soundtracks for Roman Coppola’s CQ, or Roger Vadim’s Barbarella or even the Austin Powers films, albeit without the winking humor of the latter. March is suitably serious about what she’s doing, and the results are a delight.

In Cinerama was first issued as a vinyl-only RSD title in 2021. But thanks to the pandemic, that occasion slipped by the notice of many who would have luxuriated in the sounds of April March’s musical oeuvre. This reissue-of-sorts remedies that and makes this slice of retropop available to a wider audience. Two bonus tracks are appended for this CD release, and the latter of them, “Friends Peculiar” may well be the tastiest track on an album full of such things.