Ethan Russell has ‘The Best Seat in the House’

Among the compelling cast of characters in Peter Jackson’s sprawling Get Back documentary is an American photographer. The dazzling and unlikely odyssey of Ethan Russell is the subject of a new presentation, Best Seat in the House.

Growing up in San Francisco during the early years of rock ‘n’ roll, Russell was drawn to the sounds and style of Elvis Presley. But he says that rock and roll “went away” in pop culture for several years, and when it returned, a fundamental shift had taken place. “By the time I was in college, everything that was important musically was coming from England.” 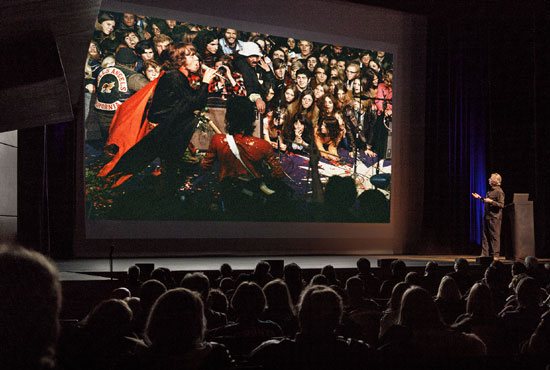 Russell was restless. “I asked my dad to borrow some money to buy a movie camera,” he recalls. His father was skeptical, questioning whether his 22 year old son was using his time well. Ethan replied that learning to make movies was more practical than flying around the world. His father called his bluff. “Well, why don’t you do that?” Ethan got on a plane and flew to London in 1968.

“I suspected that England would be like Haight-Ashbury, only further out,” Russell recalls. “Everything would be about The Beatles and The Stones.” But he discovered that London wasn’t like that at all. The Beatles had ceased touring, and they were rarely seen in public. Russell took a job in a hospital working with autistic children. “I didn’t know quite what I was doing,” he says, “but I was happy enough.”

A friend from America came to visit Russell, bringing along a copy of a new book, Family of Man. “It was a Museum of Modern Art exhibition and then a book,” Russell explains. “It’s a very moving book of photography.” Seeing Michelangelo Antonioni’s groundbreaking film Blow-Up had already inspired him to start thinking more about working behind the lens. He recalls thinking, “That’s cool! Maybe I could do that!”

Russell picked up a few photography jobs, and then one day a journalist friend asked if he’d like to come along on an interview and shoot photos. Russell agreed, and asked who was being interviewed. “Mick Jagger,” he was told.

The session went well, and Russell thought that was the end of it. “That was the peak, you know?” he says with a laugh. But six weeks later, the journalist friend invited Russell along on another interview. This time the interviewee was John Lennon.

Things took off from there. His subjects liked Russell’s working method: he didn’t get in the way. He captured images that reflected the essence of his subjects. In quick succession, Russell went on to take photos during the making of The Beatles’ Let it Be, the Rolling Stones’ 1969 tour (including the Altamont concert), the Beatles’ final photo shoot, the cover of Who’s Next and other iconic subjects.

Russell would eventually amass a portfolio of photos of many American and British rock and pop culture figures. By the late ‘70s he had moved into the field of the then-new field of music video production. And in the mid 1980s, the multiple Grammy award nominee published his first book of photography, Dear Mr. Fantasy: Diary of a Decade – Our Time and Rock and Roll. He would eventually follow that with another book, Let it Bleed: The Rolling Stones 1969 Tour.

Now – well into the 21st century – Ethan Russell has put together what he describes as a slideshow. Voicing the perspective of a potential attendee, he asks a question: “Why would I go to a slideshow?” And then he answers it from his own point of view. “I wouldn’t!”

But The Best Seat in the House is vastly more than a slideshow. “There’s a story carrying along with all these pictures,” he says. “The trip to England, meeting Jagger, meeting Lennon, shooting the Rock and Roll Circus, doing Stones tours in ‘69 and ‘72, working with The Who [shooting evocative black-and-white photos for the cover and booklet of Quadrophenia]…”

The presentation follows Russell’s adventures right through to his video years, when he made a music video for John Lennon’s “Woman.” “That’s the arc of time covered in the show: 1968 to ‘80,” he says.

Russell remains slightly in awe of his set of experiences. “I never understood why I was there, or why anybody would pay any attention to me,” he admits. But that attitude served him well as he photographed some of rock’s biggest names. “I didn’t want them paying attention to me,” he insists. “If people were saying, ‘Hi, Ethan,’ then they were looking at the camera. I wanted to be outside of all that.”

And so he was. But with The Best Seat in the House, he returns to those days, and this time, he brings the audience along. And with Ethan Russell, they are inside.