Looping – the use of digital equipment to record and play back sounds in real time as a means of musical self-accompaniment – has been around for decades. It’s most often within the realm of guitarists and vocalists, and customarily employed in live performance. But Portland, Oregon artist Joe Kye obviously didn’t get that memo: his chosen instrument is the violin, and he uses looping in the recording studio as well. Joe Kye’s uptempo, complex yet delightfully accessible music also serves as a vehicle for his lyrical themes of empowerment, equality and sharing of the American immigrant experience.

The creative result of the tension between seemingly opposing forces is at the heart of Kye’s approach. A classically trained musician, he nonetheless developed a deep and abiding love for improvisation. After years studying the violin, he left it behind in college. “I stopped playing,” he recalls. “I got sick of playing music that [another] person – usually white, male and dead – had imagined 200, 300 years ago.” 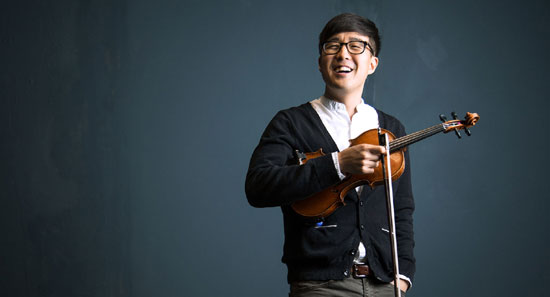 Kye’s passion for music was intact, so he got into singing, joining an a cappella group. Eventually that pursuit led him back to the violin, but this time with a completely different approach. “Every individual has their unique experience,” he explains. “And what I learned through improvisation is that I was free to bring my world view into reality.”

Kye says that he found improvisation to be a liberating activity. “It allowed me to express how I viewed my experience – as an American, as an Asian American and now as a father – in sound.” And looping allowed him to further expand his sonic capabilities. “I got a looping machine mostly to practice improvisation,” Kye recalls. He quickly found that he could treat the device as an instrument in and of itself. “It became a part of what it means to give voice to the many different melodies and identities that I have within me.”

To date, Kye has released two albums – 2016’s Seed to Sprout Live and 2018’s Migrants – along with an EP and several singles. While his work is varied – taking in textures from pop, classical, hip hop and beyond – there’s a playful spirit that ties it all together. His debut album documents a live set that sandwiches a reading of Gloria Gaynor’s disco hit “I Will Survive” between a spiritual (“We Shall Overcome”) and “The Star Spangled Banner.”

Kye laughs when that’s pointed out, but insists there’s no disconnect. “I grew up here as a son of poor immigrants,” he explains. “And ‘I Will Survive’ was one of my mom’s favorite songs. It gave her strength to continue to build a home for our family.” He believes that Gaynor’s anthemic hit goes hand in hand with a song adopted by the civil rights movement.

The interactivity that Kye pursues isn’t limited to his work with the looping device. His concerts are a give-and-take experience that involves the audience as well. “I want to elicit introspection and vulnerability,” he says, “and then develop that into a sense of communal wonder and curiosity.” During performances before the Covid era, Kye would wander into the audience, microphone in hand. “I would ask people questions, and when there was an answer that struck our communal fancy, the band and I would riff on that and create a looping song based on that moment.”

The social distancing required during the pandemic has made that approach more difficult, but Kye remains committed to finding a workaround. “We just ask audience members to yell stuff out,” he laughs.

Kye’s recent single, “The Way Out” is a collaboration with choreographer Diego Garita. Begun as a project with New York City-based Young Dancemakers Company, the track addresses the immigrant experience from the perspective of Latin Americans.

“Diego’s mom was undocumented,” Kye explains. “Because of that, he had to go back and forth between [here] and his home country in Mexico.” Garita’s story resonated with Kye, whose family emigrated to the U.S. from Korea when he was a child. “’The Way Out’ was born out of that conversation,” he says. “I tried to bring attention to the plight of refugees at the American border who are escaping sadness, poverty and the legacy of colonization.”

But even with serious themes, a Joe Kye concert is a fun, uplifting experience. And Kye is in his element onstage, interacting with both the audience and – on this tour – fellow musician, multi-instrumentalist Machado Mijiga on percussion and keyboards. “Machado will have a looping pedal, too,” Kye emphasizes. “We’ll be building large sound waves and exploring different instrumentation depending on what each song – and the moment – calls for.”