Shining On with Interstellar Echoes

While the music world is filled with singer-songwriters – artists who write their own material and record and perform it for audiences – there’s a long and proud tradition of interpreting the work of others. Cover bands are a regular fixture at intimate and large music venues alike; they bring the music of popular artists to audiences who might not otherwise have an opportunity to experience those songs played live. And operating at the highest level within that musical idiom are tribute bands: groups that put extra effort and care into authentic, faithful recreations of the music made by legendary groups.

That’s the approach taken by Atlanta-based Interstellar Echoes. Launched nearly seven years ago, the band brings the sound and visual experience of a Pink Floyd concert to modern-day audiences. Taking their name from two classic Pink Floyd songs – the 1967 psychedelic classic “Interstellar Overdrive” and the epic-length “Echoes” from Pink Floyd’s 1971 LP Meddle – the group puts a great deal of care into conjuring the sweeping space-rock vibe of the celebrated British group. 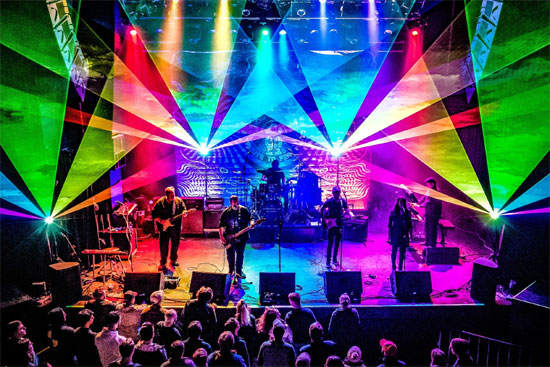 The seven-piece Interstellar Echoes came together when two longtime friends and musical associates – guitarist Chris Hinson and bassist/vocalist Jim Gorman – decided to pay tribute to one of their favorite groups. “We had always been huge Pink Floyd [fans],” Hinson says. At rehearsals for the other bands in which they played together, they’d often muse about the prospect of putting together a tribute group.

The two musicians began efforts toward that goal in 2010, but found it challenging. “It was really difficult to find all the pieces of the puzzle,” Hinson admits. He says that it was especially hard to find a keyboard player with the ability to re-create all of Pink Floyd keyboardist Richard Wright’s parts, not to mention finding one with all of the necessary equipment (electric pianos, synthesizers etc.) to pull it off.

“We auditioned at least six guys,” Hinson recalls with a chuckle, “and nothing was a good fit. We were about to give up.” Luckily for all involved, the seventh keyboardist, Eric Johansen, had the gear, the skill and the enthusiasm needed. Rounded out by guitarist David Shore, drummer Mike Altis, saxophonist Martin Anderson and singer Meg Scalise, Interstellar Echoes was complete and ready to take on the imposing catalog of Pink Floyd.

The music of Pink Floyd has attracted the attention of many tribute bands around the world, but some of those groups focus on a particular era. Pink Floyd’s most commercially successful run began in 1973 with the landmark album The Dark Side of the Moon, and the band scored major hit singles with songs from 1979’s double album The Wall. Many tribute acts concentrate on that era; Interstellar Echoes is different.

“We try to cover the whole thing,” says Hinson. He and Gorman are aficionados of Pink Floyd’s entire body of work, from the 1967 debut Piper at the Gates of Dawn through the band’s final new album, 1994’s The Division Bell and beyond. “We’re huge fans of the entire catalog and the whole mythology and lore around the band,” he says.

Pink Floyd’s popularity as a live band was always about more than the music, and Interstellar Echoes taps into that as well. Hinson emphasizes that his band makes a point of putting on a show that looks like Pink Floyd. “You’ve got to have the lights, and you’ve got to have the lasers,” he says. “We’re constantly putting money [from performances] back into the band to improve that [component] of the show.”

Unlike bands paying tribute to other bands and artists like Led Zeppelin, The Doors and Michael Jackson, Hinson’s band doesn’t have to worry about costuming, or looking like the individual band members. The members of Pink Floyd were – by design – rather anonymous figures on and offstage, rarely photographed. Onstage, the visual focus was on the technological and audiovisual extravaganza. Like the band to which his group pays tribute, Hinson explains that “we want to exist within the spectacle of lights and the atmosphere that’s going on around us.”

Hinson believes he knows why audiences still treasure the music of a band that stopped making music nearly 20 years ago. “Pink Floyd’s music – especially the lyrics of Roger Waters – is timeless,” he explains. “The music touches people deeply.” He notes that whenever Interstellar Echoes performs the title track from Pink Floyd’s 1975 album Wish You Were Here, he witnesses a similar reaction from the audience. “I look out into the crowd and I see people crying,” he says. “And they’re singing along with every word.”