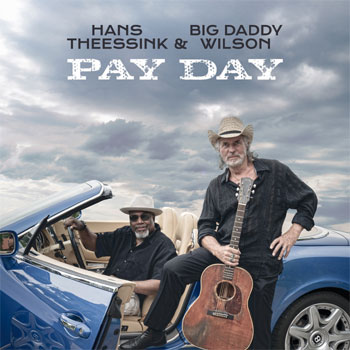 The popularity of Dutch guitarist Hans Theessink is a testament to the global reach of American blues. It’s also a testament to the quality of Theessink’s musical output. Beginning his recording career in the 1970s, Theessink has gone on to release more than two dozen albums. Many of those records have taken the form of collaborative projects, with Theessink – who sings and plays acoustic guitar, mandolin, banjo and other stringed instruments – joined by one or more fellow bluesmen. For Pay Day, he worked with North Carolina-born Big Daddy Wilson, who provides vocals, percussion and ukulele bass.

As is often the case on Theessink’s releases, Pay Day is a mix of original compositions and blues chestnuts. The warm, intimate feel of the album’s 16 tracks is one of its unifying elements. A reading of Blind Willie Johnson’s nearly century-old “Everybody Ought to Treat a Stranger Right” opens the album with some soothing, hypnotic and gentle guitar picking, augmented by Theessink and Wilson singing together in chorus fashion.

The two musicians trade verses on “Walking,” a good-natured Wilson original. Mississippi John Hurt’s Pay Day gives the album its title, and rightly so: it’s a highlight of the collection. Other than the modern-day production values, the tune sounds like it could have been recorded ages ago. Theessink’s banjo picking is placed deep into the mix, and the subtle approach works wonderfully; the instrument is more felt than heard, and the focus stays on the vocals.

Listeners won’t mistake Theessink’s originals – like “Vintage Red Wine” – for classic Delta blues numbers – but his writing demonstrates a clear understanding of (and appreciation for) the form. And his voice has a gentle yet world-weary feel that suits the material.

A paean for peace, harmony and appreciation for the blessings one has, Wilson’s I Got Plenty has a winning message, and Theessink’s trilling on the mandolin suffuses the tune with a cheery pastoral quality. And that quiet, filled-with-wonder vibe is a central component of Pay Day.

The pair gets topical with the Dutch musician’s “Virus Blues.” The approach of trading verses – and the joining for vocal harmony in key places – works well in the tune. It’s a fair question as to whether listeners are ready to listen to a song that concerns itself with as deadly pandemic, though. The lyrics is a simple observational one, and doesn’t stake out any sort of political position; this pair seems happy to leave that kind of proselytizing to artists like Eric Clapton.

Theessink and Wilson’s arrangement of “Hard Time Killing Floor” owes a good bit to Skip James’ unadorned original. James memorably performed the 1931 number on German television in 1967 at the American Folk and Blues Festival. That was many years before Wilson settled in Germany, but it’s fair to wonder if he might have viewed the performance. By sequencing the song immediately following “Virus Blues,” Wilson and Theessink create a subtle conceptual link between the two songs.

But Pay Day isn’t all doom and gloom. The peppy country gospel of “Denomination Blues” brightens the mood, and tracks like Theessink’s “Build Myself a Home” and the album closer “Roll with the Punches” are suffused with optimism.