Supersuckers bassist/front man Eddie Spaghetti is a great interview. I recently wrote a Supersuckers feature for Metro Silicon Valley, and an extended version of that piece is online here. But even that twice-as-long edit left a great deal of our conversation unused. Here are the best bits from the rest. – bk 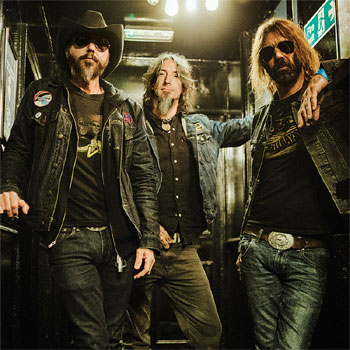 Some people argue that comedy is much tougher to pull off than drama. Does the humor in your songs – certainly not all of them but a lot of them – come naturally, or is that something you have to work hard at?

A band like Pearl Jam, they’re not being funny; they’re being very serious and morose about everything: “I’m singing a song about this girl who was taken advantage of as a child,” and all these heavy subjects, and I don’t do that. That doesn’t appeal to me.

The band has had a pretty constant lineup, with no changes in nearly a decade. Not to take anything away from the other guys, but how much of what we think of as The Supersuckers is down to the force of your personality and musical vision?

It’s been kind of tough for me to accept and to really kind of promote myself as “the guy,” but I’ve always been the driving force behind what we do. The music hasn’t really changed that music, in my opinion. It’s just gotten better. Even though I wrote some great songs back with those [previous lineup] guys, if I had these guys playing back then, the band would be so, so much better. Because I do feel like I’ve finally found the guys that I’ve always wanted to play in a band with. They look the part, they act the part, they’re professionals, they show up on time, they do the job, there’s no bitching, there’s no whining, there’s no unrealistic expectations that aren’t being met, you know? They’re totally cool with being a Supersucker, and that’s just such a great feeling.

How has paring down to a trio affected the band’s dynamic and its musical approach?

You have to just pick the most important parts to play. When we’re making a record, I’m not afraid to put more than one guitar on it, you know? I want it to sound like a rock and roll band; there might be five guitar parts on it. But live, you just do what’s important.

When we went to do the three piece, Marty was very apprehensive about it. But I knew all along that I didn’t want to go and get another guitar playing and that Marty was good enough to do the job, and I just told him, “You know, listen to Budokan, the Cheap Trick record, and just do like Rick Nielsen does.” He doesn’t play all the parts from the records, but you don’t miss it live.

There was also a live ZZ Top record – it’s some sort of bootleg off the Internet – that Marty got a hold of, and we were listening to that a lot at the same time and just trying to figure out how to go from a band that makes proper rock and roll records and, “How did they perform them live?”

That was always the big conundrum, not making the records. We knew we could do that with just three of us, but performing it live was a challenge, and it took us a little while to get it but, now, I think we sound as big as any four piece band.

The band has released at least five live albums. Do you think that – as is often said about some bands – The Supersuckers are best experienced live and that the studio albums are just an attempt to capture that energy that almost but doesn’t quite reach it? Or do you think that live albums and studio albums are just two completely different animals?

I kind of regret that we put out so much live stuff. For a while there, we were putting out every show that sounded half decent, you know? I don’t listen to live records by most bands unless they’ve been heavily doctored like Budokan or something like that.

Or Thin Lizzy’s Live and Dangerous…

Exactly! You know, then they sound good, because they’ve been run through the studio a little bit. I feel like it’s sort of lazy for a band to put out a live record unless there’s something special about it, and that’s why we haven’t done it in a long time, because I feel like our studio records are better.

I feel like the band is best heard, especially with the last four – since Get the Hell – the band sounds fucking incredible in the studio, and I’m so proud of these records, and I wish we sounded that good live. And I think we sound good live. I think just the live show is just a different animal, you know? It’s like that’s where rock and roll lives and breathes, and that’s why it’s best to see a band live because, you know, they’re right there, and all the sound is coming at you from them right now.

You can watch it on YouTube, you can watch live band footage, but it’s kind of like watching those videos of someone who rides a rollercoaster, you know? You’re seeing everything, but you’re not on the rollercoaster.

Was there ever a time when The Supersuckers weren’t The Greatest Rock and Roll Band in the World™?

Yes, there was, but we always knew it was coming.