Irreverent trio the Supersuckers have made a career out of not being serious. How else to explain a body of work that includes songs like “Pretty Fucked Up,” “Born With a Tail” and “Must’ve Been High”? But the band led by bassist/vocalist Eddie “Spaghetti” Daly is deadly serious about its brand of heavy metal-meets-outlaw country. As the band approaches its 35th anniversary and embarks on a COVID-era concert tour, Spaghetti takes a look in the rear view mirror, and provides a hint of what’s to come for the band.

From the band’s late ‘80s very beginning in Tucson – even before they were known as the Supersuckers – they played original material. “Pretty much ever since I was able to play three chords on the guitar, I’ve been making up songs,” says Spaghetti. He laughs as he admits that his skill set hasn’t progressed much that point in the three and half decades since. “I just learned what I needed to learn to make good songs.” 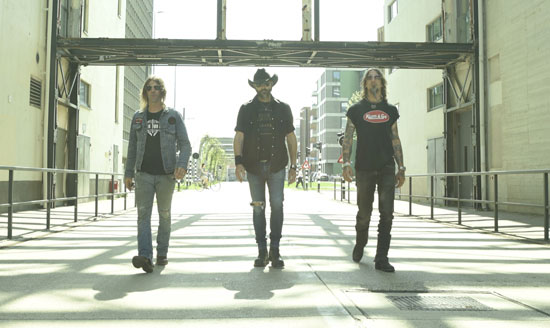 The Supersuckers’ output – a dozen albums of original recordings, four compilations and five live releases – has showcased consistent quality. But when it comes to musical style, few would describe the band as consistent. The music on the band’s records has veered from hard rock to hardcore country and back again…and again. The thread that runs through all of the Supersuckers’ music – on record and onstage – is its spirit.

Eddie Spaghetti describes the band’s enduring philosophy. “Just come up with something that’s catchy and preferably fun,” he explains. “And then play it as fast as it ought to be played.” There’s plenty of originality within that approach, but Spaghetti doesn’t shy away from naming the acts who have inspired the Supersuckers. “We live in the spirit of Motörhead, AC/DC, and the Ramones,” he says. “Throw in some Replacements, and you’ve kind of got the vibe of what we’re going for.”

When the band’s original singer left the band, Eddie Spaghetti took over on lead vocals. He’s equal parts modest and philosophical about his singing ability. “I never felt my voice was that interesting,” Spaghetti says. “But people don’t come to a Supersuckers show to hear Eddie Spaghetti hit the notes.”
All of the original members of the Supersuckers grew up in Tucson, and in typical teenage fashion, they felt hemmed in by their hometown. “We formed the band thinking that it would be our ticket out of town,” Spaghetti says. “We didn’t have any respect for it like we do now. As a kid, it seemed like a dead end to me.”

The band took an irreverent approach to the prospect of relocating, though. “We decided based on a coin toss,” Spaghetti says. “We narrowed it down to either New Orleans or Seattle.” They knew almost nothing about either city. “With New Orleans, it was all the voodoo and the swampy vibe,” Spaghetti says. And Seattle’s rainy weather seemed appealing. “It rains, so you could wear a leather jacket all the time!”

Seattle won the coin toss, and off the band went. Spaghetti recalls thinking, “There’s nothing going on up there; there’s no [music] scene. We’ll go up there, we’ll be the greatest band that anybody’s ever seen!” When the Supersuckers arrived in the Pacific Northwest, reality hit them hard. “Nirvana was already going,” Spaghetti laughs. “Soundgarden and Mudhoney were already going. We didn’t know anything them, or about Sub Pop Records!”

Thanks to a friend – the only person in Seattle they knew – the members of the Supersuckers all landed jobs in Sub Pop’s mail room. “I got a job stuffing 45s into sleeves,” Spaghetti says. He recalls seeing and hearing the very first promotional copies of Nirvana’s 1989 debut, Bleach. “I was just blown away: ‘We could meet those guys?’ And of course, we did. It was a real cool time.” The band eventually inked a deal with Sub Pop; they would go on to release four albums on the hip indie label.

The group scored a major break in 1995 when Willie Nelson invited them to play at Farm Aid. That performance represented a turning point. “It really helped us a lot to get solidified in that whole outlaw country world,” Spaghetti says, noting that expanding the band’s style to include both hard rock and country effectively took the expiration date off the band. “It’s acceptable to be an old fart in a cowboy hat up there singing songs,” he says with a chuckle, only half kidding.

In 1997 the Supersuckers dove headlong into outlaw country with the release of Must’ve Been High. But Spaghetti says the musical move wasn’t the abrupt shift it’s sometimes thought to have been. Even back in their Tucson days, Spaghetti and his pals played country. “We had a band called The Junkyard Dogs; that predates The Supersuckers,” he explains. “We would busk country songs, playing them with acoustic guitars.” He insists that The Ramones and Hank Williams “are doing the exact same thing: writing songs that are short, simple and perfect.”

Supersuckers LPs rarely shift major units or trouble the national album charts, but they consistently earn critical plaudits. Spaghetti has mixed emotions on the subject. “I’m not trying to be so clever to only appeal to the critics,” he insists. “I don’t really care about that. I just want to make good, fun, rock music. And I like cheesy, shitty, disposable pop music as much as anybody else does.”

It looked like another big leap forward was in the cards when Interscope Records picked up The Supersuckers. But abrupt changes at the label left the band high and dry, with an unreleased album in the can (where it remains to this day). “We made a real cool record with Tom Werman, who had produced Cheap Trick, Mötley Crüe and Molly Hatchet,” he says. “But nobody’s ever heard it.”

The whole episode was a crushing blow to the band, but they persevered. In 2002 The Supersuckers launched their own label, though within a few years they started releasing albums on L.A.-based indie Acetate Records. Featuring a trio lineup that’s been in place for nearly a decade – Spaghetti on bass plus guitarist “Metal” Marty Chandler and drummer Chris “Chango” von Streicher – Their most recent new release is 2020’s Play That Rock -N- Roll.

The Interscope debacle paled in comparison to another challenge the band would face. Diagnosed with cancer, Spaghetti wasn’t sure if he – much less the band – would survive. “The band stopped working for a year,” he says. “It was a brutal thing to go through.” But Spaghetti earned a clean bill of health in 2015. “You look back and think, ‘Wow! I kicked cancer’s ass in less than a year!’” The record that eventually came out of the experience, 2018’s Suck It, is equal parts dark and humorous, and it ranks among Spaghetti’s favorite Supersuckers albums.

That sometimes uneasy balance between dark/serious and fun/outrageous is a hallmark of Spaghetti’s personality, and, by extension, the character of The Supersuckers. After being sidelined by the pandemic, the band is lining up a run of live dates. “We’re going out into this vast, messy, germ-filled world, to try to tour,” he says. “And there are upsides: maybe I won’t have to be giving hugs to strangers!” But then his tone darkens. “But I was thinking today, ‘What if this is the end times event? What if the disease keeps mutating and – over the next 30 years or so – kills off the entire planet?’’’

He hopes and assumes that won’t happen. And asked where he sees The Supersuckers five years from now, Eddie Spaghetti has a ready answer. “Probably just doing the same thing we’ve been doing for the last 30-plus years,” he says. “Just making killer rock music.”