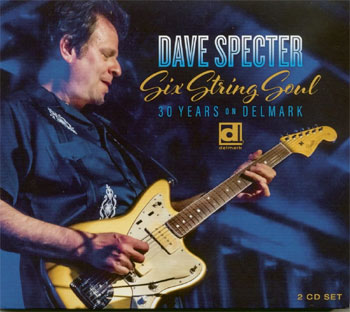 Guitarist Dave Specter was associated with the venerable Delmark record label long before he was signed as an artist. The Chicago guitarist was taught by New York-born Steve Freund, who had moved to Chicago in 1976 and worked for the label (and at Bob Koester’s legendary Jazz Record Mart). Specter picked up the guitar in the early ‘80s when he was just 18. In the decade that followed, he established himself in the city’s blues clubs, first as a sideman (to Son Seals and others) and then as leader of his own band, the Bluebirds.

Specter joined the Delmark roster in 1991, releasing his debut, Bluebird Blues, featuring fellow guitarist Ronnie Earl and vocal powerhouse Barkin’ Bill Smith. Over the next three decades – and in between a heavy gigging schedule that found him playing more than 200 dates a year in the U.S. and Europe – he would release a dozen albums. All are well-regarded, though a few – including 1994’s Blueplicity, and 2004’s Is What it Is (the latter featuring Spector’s mentor Freund) come in for special praise among blues aficionados.

The occasion of Specter’s 30-year anniversary with the label is occasion for a career retrospective. And the 2CD Six String Soul serves that purpose. A chronological overview of the guitarist’s catalog, the album does more than simply pick and choose from among the many highlights found on Specter’s releases. It highlights Specter’s Chicago roots and shines a light on the connections he has with other well-regarded musical figures from Chicago and well beyond.

Specter’s early releases lean in a warmly traditional Chicago blues style, and while he’s the billed performer, Specter often cedes the limelight to his singers. But there are plenty of instrumental cuts that demonstrate Specter’s sill, finesse and stylistic variety. There’s a soul jazz sensibility on “Wind Chill” (from Specter’s debut) that owes a debt to Wes Montgomery while delivering an authentic blues feel. Six String Soul draws three of its 28 tracks from Bluebird Blues.

Some of the more recent material in the collection signals a change for Specter. Beginning with 2019’s Blues from the Inside Out, he has stepped up to the vocal mic for selected tunes. Alongside his stinging lead guitar on that album’s loping title track, Specter acquits himself well as a singer, with a vocal character reminiscent of Elvin Bishop.

That track is one of four from the 2019 record (also featuring Jorma Kaukonen and Brother John Kattke) to be included on Six String Soul. And every one of his albums for Delmark – including the live set from 2008 – is represented here. Also featured are select cuts from two albums he made with others: Al Miller’s Wild Cards from ‘95 and Floyd McDaniel’s 1997 West Side Baby, recorded live shortly before McDaniel’s passing. Those tracks underscore the fact that Dave Specter is as comfortable working as a sideman as he is fronting a band.

Even though it’s designed as a retrospective of one man’s career, the defining characteristic of Six String Soul is variety. Dave specter’ style is rooted in Chicago blues, but he’s equally at home playing jazz, and that feel comes through in his guitar work. And while he’s a fine songwriter himself – working alone and with co-writers – Specter has shown himself to be a superb interpreter of the works of others. All those qualities are highlighted (and balanced) across Six String Soul’s pair of CDs.

The collection closes with a new track that had previously been available only in digital format. The subdued yet heartfelt “Ballad of George Floyd” is a topical tune featuring vocals by Billy Branch. It’s a fitting tribute to man whose untimely death served as a societal flash point. Specter provides an emotion-filled guitar solo.

As a sampler of three decades of work from a fine musician, Six String Soul is an effective collection. And because it seeks to draw representative tracks from his catalog (as opposed to “hits”), it can serve as an introduction for listeners new to his music. Longtime fans can enjoy it for its well-curated set of songs; newcomers may well find that Six String Soul kick-starts their appreciate of the Chicago guitarist, sending them back to pick up other items in his back catalog.