Album Review: The Ed Palermo Big Band – I’ve Got News For You: The Music of Edgar Winter 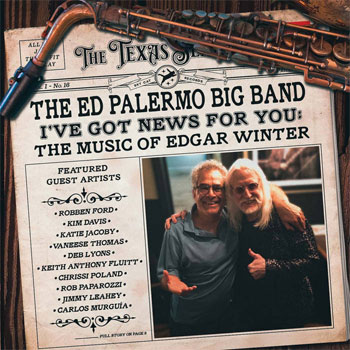 Edgar Winter is most well known for a short list of things: his instrumental hit single “Frankenstein” and being the brother of (late) guitarist Johnny Winter are chief among those. But he’s a musician and recording artist of great import. Real Gone Music put together a best-of collection a few years back, and I had the unequaled pleasure of writing the liner notes for it. For that project, I interviewed Winter a couple of times. I still remember when he first phoned me. I didn’t recognize the number, and when I answered, a voice said, “Bill? This is Edgar.” I nearly dropped the phone. (I’m a longtime fan: I bought They Only Come Out at Night in December 1972. I had just turned nine.)

“Frankenstein” was, if you’ll forgive the phrase, a freak hit. Winter’s signature style was and remains eclecticism. As opposed to his brother, who worked almost exclusively in the blues and blues-rock genres, Edgar’s approach is more widely encompassing, exploring jazz, soul, fusion, r&b and other forms. His catalog is formidable, and his own musicianship – on vocals, keyboard and saxophone – is excellent.

All of that makes the work of Edgar Winter an ideal choice for the attentions of Ed Palermo. The big band leader extraordinaire has made something of a name for himself by tackling the work of some of the most intriguing names on the music landscape. When one thinks of the unifying qualities that connect Frank Zappa and Todd Rundgren, that word eclecticism comes to mind.

By necessity, I’ve Got News For You: The Music of Edgar Winter is all over the place stylewise, but Palermo’s thrilling, tightly arranged big band is the glue that holds it all together. Drawing from all across Winter’s body of work – songs he wrote as well as songs by others that he covered – Palermo creates a unified and compelling album.

Even though Palermo is renowned as the leader of an instrumental ensemble, the vocals on I’ve Got News for You are among the record’s most significant assets. Kim Davis (“Tobacco Road”) and Deb Lyons (the majestic “Entrance”) in particular deserve special notice, but they’re simply the best among a stellar bunch.

Great a tune as it is, there’s no “Frankenstein” here, and it’s not missed. (You may recognize part of the song in the form of “Hung Up,” though.) Palermo’s choice of material is superb, and his treatment of Winter’s work manages to honor the material while building upon it. Palermo’s ongoing work underscores the fact that in the right hands (hint: his) the big band idiom has much left to offer, and is well-suited to reinterpretation of the works of important artists, no matter what their chosen style.