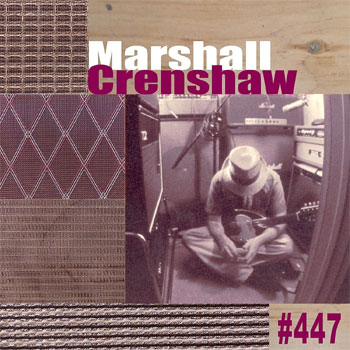 I vividly recall just how knocked out I was upon first hearing Marshall Crenshaw’s self-titled LP debut in 1982. Recorded four decades ago this month, it was released a few months later. Its chiming sound and uncluttered instrumentation provided a perfect canvas for Crenshaw’s wonderful songwriting and appealing vocals. In some ways it was totally out of step with the then-prevailing fashion (though it did likely appeal to some of the people who bought Stray Cats records), but then as now it’s a stone classic.

Subsequent albums built on that creative success, expanding Crenshaw’s musical landscape but remaining true to his pop (in the best sense of the word) musical values. What those records didn’t do, however, is make Crenshaw a household name or win him truckloads of cash. Unlike today, in those days, record label did sometimes stick with quality artists, giving them time to (potentially) find a larger audience. So Crenshaw released no less than five albums on Warner Brothers. They’re all great – each in their own way – and all deserve a place in your collection.

When he and Warners parted, Crenshaw went on to release an album on MCA. Working with producer Ed Stasium, he created yet another superb album with 1989’s Life’s Too Short. Critics were near unanimous in their praise for it, and the public was near unanimous in its indifference. After that experience, Marshall Crenshaw became an indie artist, and has remained one ever since. (He’s also an author, curator, filmmaker, actor and more, but a discussion of that lies beyond the scope of this review).

His pace of releasing albums slowed markedly in that period, not least because of his involvement in the pursuits mentioned above. Miracle of Science appeared in 1996, and it would be three more years before a follow-up appeared. Released in the final year of the 20th century, #447 showed (to those who would pay attention) that Marshall Crenshaw’s creativity had not dimmed a bit.

The delightfully noisy “Opening (It’s All About Rock)” doesn’t sound like the rest of the album, but it’s a delight. “Dime a Dozen Guy” possesses a jazzy flavor applied to a stellar pop tune. “Television Light” is transcendent pop, with soaring yet subtle production values worthy of its strong melody. “Glad Goodbye” returns to the spare vibe of his debut. The atmospheric instrumental “West of Bald Knob” will remind listeners of just how underrated a player Crenshaw is.

“T.M.D.” is a sweet melody that (again) hearkens back to Crenshaw’s debut, with some lovely string-synth work added to the mix. “Tell Me About It” sports a loose-limbed opening, but once it finds its footing, it follows on with the consistent quality that’s a Crenshaw hallmark. It’s a wonderfully memorable song. “Ready Right Now” rocks harder than most of the other material on #447, but Crenshaw is skilled enough to rock out without sacrificing melody.

Marshall Crenshaw channels the spirit of Wes Montgomery on the sultry “Eydie’s Tune.” As fine a singer and lyricist as he is, this tune (along with “West of Bald Knob”) underscore the fact than an album full of Crenshaw instrumentals would be a very, very good thing indeed.

“Right there in Front of Me” is another song that would have fit nicely on the (already perfect) ‘82 debut. Crenshaw reaches to the top of his vocal range for the harmonies, and it works. The album’s third instrumental cut, “You Said What?” again leans in a jazz direction. It’s simply fantastic, sounding like the theme for a great classic movie you haven’t seen yet.

The original album ended there. A new reissue on Crenshaw’s own imprint adds two bonus cuts, both of which are new. Both show how little Marshall Crenshaw has changed in the two—lus decades since he made #447. “Will of the Wind” has a stinging lead guitar lick and breezy vocals; the juxtaposition of the two is perfect. The tune is as superb as anything on the flawless ‘99 album. “Santa Fe” is a Greg Turner composition with a swooning, high-lonesome vibe. The contemplative number (a) fits well on the album, (b) provides a tidy ending for the new reissue and (c) further whets listeners’ appetites for more new music from the master of melody, Marshall Crenshaw.