Album Review: John Mayall — The Sun is Shining Down 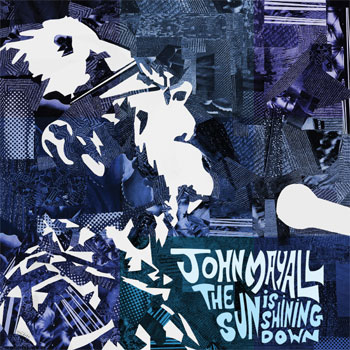 John Mayall is widely acknowledged as the godfather of British blues. And that’s not the result of any sort of revisionism; it’s a title he earned long, long ago. As far back as 1981, I was writing an essay for my college freshman English class on the “British blues boom,” and the piece centered around Mayall and his role.

Fast forward to 2022. I’ve had the pleasure of seeing Mayall in concert multiple times. Once was in the ‘90s, with, I think, Coco Montoya as his lead guitarist. Another was much more recently, a few years ago in Charlotte. Both times I was struck by his vitality, his unwavering commitment to his brand of blues. And his staying power: today he’s 88 years old, having roamed this Earth for longer even than Bill Wyman (85) or Madonna (82…just kidding).

I also got to interview him twice: once in 2016 and again later that year.

And while Mayall recently announced a retirement from touring (keeping the prospect of one-offs on the West coast as a possibility), he continues to busy himself with new recordings. 2019’s Nobody Told Me is a winning, appealing collection. And his latest, The Sun is Shining Down, follows on from the defining characteristic of the previous release.

For nine of the album’s ten tracks, Mayall is joined by a Special Guest Star, usually (but not always) a lead gutiarist. The approach serves to reinforce the idea of Mayall’s status as a blues tastemaker and mentor-of-sorts to younger generations.

Just listing the names will give you a sense of the potential for very good-to-greatness on hand here: Melvin Taylor, Marcus King, Buddy Miller, Scarlet Rivera (on violin), Mike Campbell, Jake Shimabukuro (on uke, of course), and Carolyn Wonderland.

All-star galas like this can sometimes fall flat, filled with phoned-in performances. That’s not the case here; everybody’s on fire, and to a man and woman they seem to appreciate the importance of being involved in a Mayall project.

Mayall himself wrote about half of the songs on The Sun is Shining Down, including the title track (featuring Wonderland). A three-man brass team (Ron Dziubla, Mark Pender, Richard A. Rosenber) give a nice chunky quality to the songs. And Mayall’s voice – distinctive but not the strongest in the blues – is in fine form. Young’uns like Marcus King tear into the material with aplomb, relish and other fancy-word approaches.

The variety of styles among the guests gives the album some of its winning character; the rest comes from the other end of the creative spectrum: consistency. Mayall’s signature approach to the music is one he has honed over the many decades since Mayall Plays Mayall, a Bluesbreakers debut that pre-dated Eric Clapton, Peter Green et. al.

The opportunity for those of us outside SoCal to witness John Mayall may have passed, but the fact at as he steers toward his 90-year mark while still making vital new recordings … well, that’s in and of itself quite an inspiration.