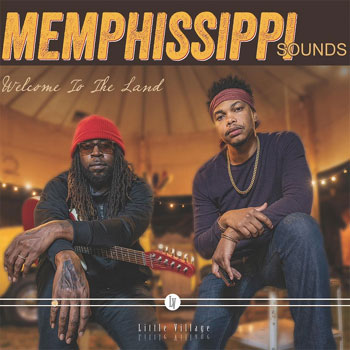 The blues featured guitar-and-drum duos long before that lean and mean lineup became a popular approach in other musical idioms. So there’s a long and proud tradition for what Memphissippi does. Yet the duo – Damion Pearson on vocals, guitar and harmonica, joined by drummer Cam Kimbrough (who also plays guitar and sings) – has a character that places one foot firmly in the past, the other proudly pointed toward the future.

They make a joyous racket when they want to. Welcome to the Land (out September 20 on Little Village) opens with the heavy, hypnotic “Who’s Gonna Ride.” Built around a deceptively simple one-chord riff, the song surges forward relentlessly with the intensity of a locomotive. The song starts off powerfully, and it builds a head of steam from there. Vocals, stabbing lead guitar and wildly blowing harmonica all gain in strength as the tune barrels ahead. And a fadeout ending has rarely been as appropriate as it is here, with the song fading away like a train disappearing on the horizon.

“Groove With Me” is possessed with all the swagger of prime-era Muddy Waters. Kimbrough’s drum work is confined to a stomping, insistent bass thump, a bit of hi-hat and an occasional cymbal crash. But as the duo demonstrates throughout this record, he innately understands the needs of each song. And this cut doesn’t need more. The squealing, squalling guitar lines take center stage.

Other than a few extemporaneous shouts, “I’m Mad” is an instrumental. The duo gets everything you need to know about their mood across without having to sing about it. And in the song’s second half, they take flight, running through chord progressions that bring the album close – but not too close – to rock and roll.

And even though the blues is the preferred style of Memphissippi Sounds, the duo’s skill set clearly extends far beyond its confines. “You Got the Juice” is slinky, down-and-dirty soul. The tune presents the duo at its loosest, suggesting that the number might have been an off-the-cuff recording. But if this is what they come up with when musically free-associating, a live set might be even more thrilling than this set of nine studio cuts.

The breathtakingly spare instrumentation on cuts like “Look Out for the Wolf” means that the vocals, playing and arrangement all have to be top-notch; there would be nowhere to hide for weak elements. But that’s of no concern to this pair; they’re assured and in total command of all those components.

It takes a lot of moxie for a blues artist to present an original song called “Crossroads.” But This duo has the goods, and so while Memphissippi Sounds’s new tune might not achieve the popularity of the Robert Johnson standard, the easygoing, loping one-chord piece is a worthy addition to the blues canon. Pearson’s harmonica work is impressive throughout the record, but on this cut he wails in an extra-special fashion, delivering emotional intensity with every blow.

Inside the disc’s gatefold sleeve, a brief note provides something of a Memphissippi Sounds mission statement. It characterizes the project as “a voice for the blues people, the sons of share croppers; a voice for the marginalized; an escape from the main stream; a swim in muddy waters; a testimony to time, grit & grind; a healing sound; a mantra; a shot in the dark; a rude awakening; a sign of the times; a SOUND.”

That’s all true, but Welcome to the Land is also a simply great listen. Memphissippi Sounds proves that in the right hands, much of value can be done with just a few tools. Everything about Welcome to the Land suggests that Pearson and Kimbrough have talent and creativity to burn; they’re ones to watch.