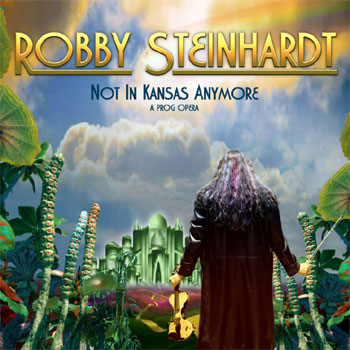 Robby Steinhardt is best known as violinist for Kansas. He passed away recently, but not before completing an ambitious project. Titled in a perhaps too on-the-nose manner, Not in Kansas Anymore is a prog opera, and it’s an impressive work. Steinhardt’s compositional abilities were superb, demonstrating a deep understanding of the rare place in which progressive rock and pop hooks intersect.

The songs on Not in Kansas Anymore rock out, but they also showcase the proggy twists and turns (and flights of virtuosity) that characterize the genre. And Steinhardt’s arrangements put the focus upon memorable melodic lines, too, adding up to a well balanced album that ticks most all of this reviewer’s boxes.

Befitting a work by a strings player, the album is filled with rich orchestration, featuring the real things as opposed to modern keyboard equivalents. The Bösendorfer piano is real, too, and sounds like it.

Listeners who approach the album expecting it to sound like Kansas will find some stylistic cues in common, but Steinhardt’s solo muse led him in some directions that might not have fit neatly into the aesthetic/format of his old band. That said, the emphasis is squarely on accessibility throughout the album’s 11 tracks. And in a nod to his former group, Steinhardt inserts bits of his signature melodic lines from “Dust in the Wind” into “Prelude.”

Oddly, though that tune doesn’t open the album; it’s the sixth track, preceding a new recording of – you guessed it – “Dust in the Wind.” The new version is lovely, though it doesn’t really add much to the original, and its inclusion here elicits a shrug. Far more interesting are the album’s other tracks, like the classically-tinged (and aptly/playfully titled) “Pizzacato.” (That’s not a typo.)

The tiny (5-point or so) type in the CD’s liners make sorting out who-plays-what an exercise in futility, and the same is true for the lyric sheet. The lyrics to “Downtown Royalty” won’t be to some listeners’ tastes – they’re a bit histrionic and overwrought – but the tune itself is nice enough. In any event, most listeners will likely gloss over the lyrics – perhaps focusing instead upon the sonic quality of the massed vocals throughout – and luxuriate in the arrangements and instrumental breaks.

Plans were afoot for a tour in support of the album, but Steinhardt’s passing last July put an end to those. His collaborator on the project, producer/arranger Michael Franklin, shepherded the album to completion and release. And Not in Kansas Anymore stands not only as a fitting way to remember Steinhardt, but as a worthwhile listening experience.