The PFM Bonus Interview, Part 3 of 3

Bill Kopp: Have you given any thought to, once you play outside of Italy, as you do these songs, whether you’ll sing them in Italian or in English?

Patrick Djivas: Many times, we sing in Italian outside of Italy too. Many times, they ask us to do it, especially in Japan, for example. They love to listen to the Italian lyrics. They don’t understand the English lyrics either, but it seems like Italian sounds more like Japanese than English. Many times, even American audiences like to hear the Italian.

Franz Di Ciccio: There are some songs that they love to hear in Italian, for example. “The World Became the World,” for example, is one of those. They like the Italian lyrics more. I don’t know if maybe it’s the sound. They don’t understand the meaning of the song exactly, but they love the sound, because it sounds very romantic.

Patrick Djivas: You know, when you play in Japan, when you do a concert to a 3000 people crowd, when you finish the concert, you have 3000 people waiting for your autograph and waiting for you to sign their records or their photos. It’s amazing! So, many times, we have these guys who come to us, and they talk in Italian, and they talk with our lyrics! They say that they learned Italian because they’re fans and that they wanted to know what it meant. Many kids have come to us and said, “Well, we got married, because we both loved PFM!” I say, “Okay, yeah, well don’t blame us!” [laughs] 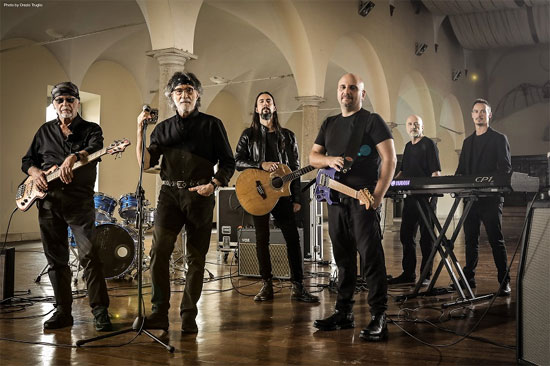 Thinking back to the earliest days of PFM, was there any precedent in Italy for what you were doing before you did it?

Patrick Djivas: Not really. At the time, music was more the beat [era]. So, in Italy first of all, very few bands were playing original music. They were just playing music from America, from England with Italian lyrics, you know? Including us at the beginning! Not as PFM, but the band before they became PFM and decided to do their own music and to start doing what they felt. PFM were the very first ones to use a very weird name and, after that, you know, thousands of bands came out with very strange names. Before, all the bands had animal names.

Anyway, in Italy…You know what happened? At a certain point, PFM was very lucky, because the very first single became a huge hit in Italy. That helped a lot, obviously. We came out with an LP because, at the time, [Italian] bands didn’t have any LP. They had singles! After that, the music scene in Italy changed a lot, not only for us but for all the music coming out from England. It happened to be the same thing in England, you know, in a way, when the prog scene came out and elaborate music came out. So, what happened, which was really great at the time, especially in Italy, I don’t know if it was because of the way young Italian people were at the time or whatever, but this kind of music became mainstream music, and that’s amazing! Quality music became mainstream. For example, Miles Davis was coming to Italy and playing for 20,000 people, things like that.

Franz Di Ciccio: When Genesis came to Italy, the Italian audience loved them. At the time they were not so famous. They played in Ancona the first time, and we played together! We opened the show for Genesis. That’s one of the reasons we are friends too, you know?

Patrick Djivas: Not that much in Italy. Not in Italy but out of Italy. Like in Japan, if you talk about jazz, then you’re going to talk about American music, you know? In Japan, if you talk about prog music, they’re going to say “Italian!” There still are, nowadays, many many groups in Italy playing prog music. They don’t sell records, but many of them are playing, and some of them are pretty good.

Franz Di Ciccio: Because it’s amazing to play this music, that’s the reason!

Patrick Djivas: Because of Italy being an ancient, classical nest for music, classical music is pretty much in the people’s DNA. Maybe this is one of the reasons: the memory, the sense of the melody of Italians is very powerful. Our guitar player, for example, Marco Sfogli is an incredible and very very fast [inaudible] guitar player. He’s ridiculously fast on the guitar and does all those tapping things, but he has such a great heart, because he’s from Naples. The people there are pretty real people. They have a heart, and they have a very good sense of melody, because their traditional music is full of melody.

We all know “O Solo Mio,” you know, “It’s Now or Never.” These are typical Neapolitan melodies, you know? So, our guitar player has all the technical background of musicians nowadays, but he is from Naples, so he has all these melodies coming out. Maybe this is the reason why, in Italy, prog music is so important.