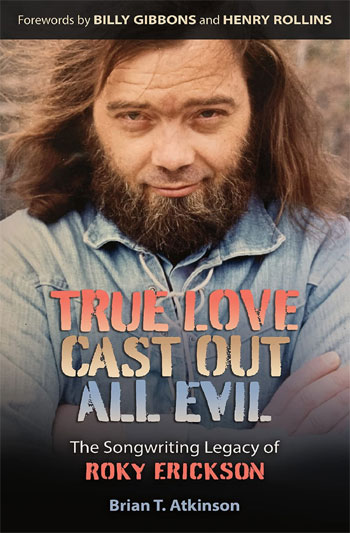 Though he left this dimension a few years ago, Roky Erickson continues to fascinate and inspire. I was fortunate enough to see him more than a decade ago onstage at the Ponderosa Stomp; my own bootleg recording of that performance is a searing document of the man’s music, presented at a time long after most had counted Roky out.

There have been many books about Roky. Paul Drummond’s definitive history of the 13th Floor Elevators is a must-read, and if I do say so myself, the Roky chapter in my own book about 415 Records explores a specific – and creatively fertile – chapter in Erickson’s solo career.

A history of Roky’s post-Elevators period might not make for pleasurable reading; it would inevitably have to focus on his time at Rusk Hosapital, his bouts with the law, and the difficulties he faced throughout his life. And that’s not the approach taken by Brian Atkinson. Instead, Atkinson focuses upon Roky’s songwriting legacy.

Atkinson himself does remarkably little writing within the pages of his own book. Instead, he’s a curator, an editor, bringing together reminiscences about Erickson from all manner of luminaries. That list includes Roky’s brother Mikel, former band mate John Ike Walton and Billy Miller, co-writer Clementine Hall, producer Stu Cook, Chris Knab of 415 Records, producer Mark Lanegan, singer-songwriter John Weley Harding, musicians Will Cullen Hart, Dom Flemons and Alex Maas, and literally dozens of others.

The long and eclectic list of contributors underscores just how influential Roky and his work have proven to be. Each has his or her own perspective and writing style, but this collection of essays – that’s really what True Love Cast Out All Evil is – presents enough varied takes on Roky that a three-dimensional portrait of the man begins to emerge. Atkinson has done a fine job as curator/editor, and his book is an important addition to the body of work exploring Roky Erickson.