Album Review: Rachel Flowers — Bigger on the Inside 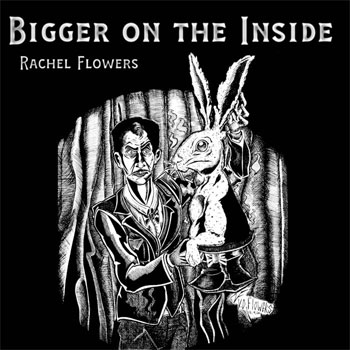 The manner in which I first discovered Rachel Flowers is, I would imagine, similar to the way that many others learned of this remarkable artist. Videos on YouTube showcased her astounding ability on synthesizers and other keyboard instruments. I witnessed her playing some incredibly challenging pieces from the likes of Keith Emerson.

What I didn’t know then – and in fact have only just discovered – is that Flowers is a formidable composer in her own right, as well as master of many more instruments than I might have guessed. And if all that weren’t enough to impress mightily, Flowers has a great voice, and superb command of that instrument as well.

All of those assets are on brilliant display on Bigger on the Inside, her fourth album (fifth if you count 2017’s Hearing is Believing, the soundtrack to a documentary film made about Flowers). She has been blind since shortly after birth, but from a listener’s perspective, that’s only important insofar as it makes what Flowers achieves all the more noteworthy.

And none of all that would matter much in the context of an album review were it not for the fact that Bigger on the Inside is a fantastic record. Nine songs written by the artist (her mother Jeanie provides lyrics for one of those), it’s a showcase for her incredible talents. The album opens with “A B,” a fully-developed instrumental that kicks off sounding a bit like Red-era King Crimson, then shifting seamlessly into a sort of progressive jazz bag. The band is astounding – superb drums and bass and forceful guitar work, all backing up keyboardist Flowers.

At least that was my initial though. Y’see, Flowers plays all the instruments on Bigger on the Inside. And once the new listener is drawn in by the tour-de-force that is “A B,” they’re treated to yet another surprise: after a dramatic church organ introduction, “Take Me Away” pulls back the curtain for a wide-screen orchestral passage. All goes quiet, and then Flowers starts to sing. She’s possessed of a lovely, deeply expressive voice that simultaneously communicates power, fragility and a sense of wonder and awe.

“Take Me Away” is the album’s second-lengthiest track, but even at nearly twelve minutes, not a moment is wasted. Halfway through it turns into a pop tune, but please note that I’m using the term pop here in a manner that fans of Steven Wilson’s The Future Bites would understand. Miley Cyrus this artist is not. And devotees of extended keyboard solos that display virtuosity and a strong sense of melody (in other words, Caravan fans) will delight in the track’s extended organ workout.

“Too Much” is gentle, crystalline piano ballad with some intriguing, understated percussion. Multiple vocal overdubs reveal that Rachel Flowers isn’t simply a powerful lead singer; she’s a superb background singer, too. And the instrumental work never lets down even the most demanding listener. “Too Much” sounds like a scintillating single.

Flowers’ pop sensibility is highlighted yet again on “Love Today.” A delightful lead guitar break is tantalizingly brief. “This is the Way I Am” is the co-write with mom; the instrumental component of the song is a skittery, syncopated arrangement that might remind some listeners of Gentle Giant. Flowers explores her vocal range here, but in a way that serves the song and isn’t the least bit showy or indulgent. Oh, and it features another tasty keyboard solo.

While “Darkness” start out quietly and contemplatively, it develops into a moody prog rocker. Flowers’ understanding of musical dynamics is a thing to behold; she has an innate sense of how to employ those dynamics in the context of a pop-grounded song.

Another just-short-of-12-minutes track, “Feel” places melody first and foremost. An impressive variety of tones and textures characterizes the song, and a gentle, dreamy midsection gives way to a soaring extended instrumental break that find Flowers doubling her parts on guitar and keyboards. She may well be one of the best progressive rock groups ever to exist.

“Beautiful Dream peels all of those instrument away, leaving a solo piano and a solitary voice. It’s lovely and heart-rending, and somewhat uncommonly for the prog idiom, the lyrics are solid. And Bigger on the Inside closes with the delightful “With You,” a tune that brings together all of the strengths that have cascaded upon the listener for the previous hour. The tune builds in intensity as it progresses.

As emotion-filled musical thrill rides go, Bigger on the Inside is hard to beat. And if you’ve read this far, you will not be surprised to learn that Rachel Flowers’ latest album is shortlisted for my Best of 2021, coming soon.