Multiple Grammy Award nominee Marc-André Hamelin is renowned for his dazzling technical prowess, his prolific nature – he has released more than 80 albums – and his deep and wide repertoire. The latest release from the French Canadian pianist is a collection of opera transcriptions and fantasies by Franz Liszt and Sigismond Thalberg. Hamelin performed a recital on November 11 at the Tryon Fine Arts Center. 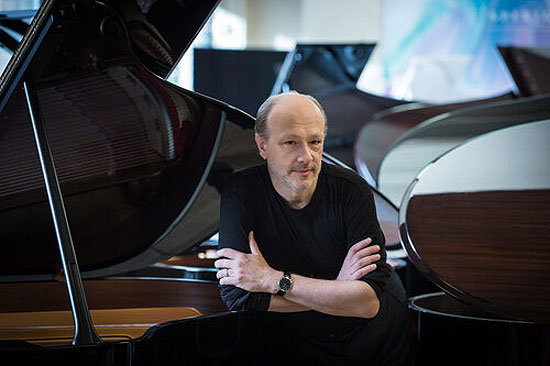 You play as a soloist, in duos, quartets, with orchestras. Do you prefer one over the other?
Oh, music is music. I like anything. I love solo recitals, I enjoy partnerships with orchestras and conductors very much, and I just love chamber music. The communal playing experience is always a renewed pleasure.

What can people expect when they come to the recital in November?
The first half of the program would be largely unfamiliar to audiences. It’s a program that [features] a C.P.E. Bach “Suite,” the Prokofiev “Sarcasms” which is a suite of five pieces, the Scriabin ‘Sonata No. 7.” The second part of the concert will be the Beethoven “Hammerklavier” sonata. Being Beethoven, there’s certainly an aura of familiarity, but it is still a very intense 45-minute listening experience. The piece is a monolith!

How many of the works on that program have you recorded previously?
Only the Scriabin, although the C.P.E. Bach is going to be part of an upcoming set which is going to be released in January.

You have a deep interest in unearthing and performing rarities. What are some of the criteria that you use for deciding if a piece makes it into your repertoire?

It has to reach me first. It has to make me so enthusiastic that I want to share it with others; my primary concern is always the listener. I don’t go on stage to exhibit myself; I want to be seen as someone who can be trusted in presenting and introducing these unknown pieces in a way that would be appreciated and understood.

With more well-known works, how do you balance being faithful to the composer with bending the music to your own style?
I learned a lot by being a composer myself. Musical notation is a very imperfect kind of system. It is the only way by which you can impart information to performers, especially after you’re dead! I usually have a pretty clear idea of how I want my pieces to sound, but I have to accept the fact that, because they are transmitted through musical notation, there’s going to be some kind of variation of my intentions and perhaps even distortion. If you are too specific, you end up sort of micromanaging; it wraps the performer into a straight jacket, and they’re afraid to do everything…or they try to do everything at once. So, you shouldn’t write too much, but not too little either. A composer has to trust that performers are going to be able to read between the lines and sort of guess what you’re after.