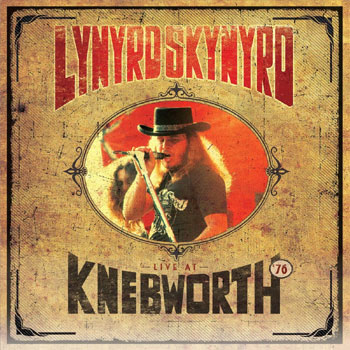 Released in September 1976, the double LP One More from the Road has stood the test of time as the definitive (and for many years only) recorded document of Lynyrd Skynyrd live onstage. Save for a pair of “authorized bootlegs” released in 2009, no live recordings have been released featuring the band in its prime. But now there’s a new CD+Blu Ray package, Live at Knebworth ‘76.

Playing in England as part of a late August outdoor festival that also included Todd Rundgren’s Utopia, 10cc and headliners the Rolling Stones, Lynyrd Skynyrd’s spot on the bill placed them in front of the massive crowd – estimated between 150,000 and 200,000 – in the middle of the afternoon. Though their fourth album, Gimme Back My Bullets, has been released six months earlier, it reached only #34 on the British charts. The band’s 11-song set drew from its first four albums, but for most of the crowd, only the last two songs – “Sweet Home Alabama” and “Free Bird” – would likely have been familiar.

Yet as the Blu-Ray disc demonstrates, the band from Jacksonville, Florida won over the crowd. Lynyrd Skynyrd was never a “jamming” band: what you heard on the records would be reproduced virtually note-for-note onstage. Other than the Honkettes – the three-woman vocal chorus that joined the group onstage for four numbers – the group didn’t provide much in the way of visual interest. And even though the band was massively popular at home in the States, they looked a bit lost on the giant Knebworth stage, the bassist and three guitarists mostly huddling close to singer Ronnie Van Zant. Only for the instrumental section of set closer “Free Bird” did they venture onto a giant ego ramp; even then, the crowd was kept some distance from the stage.

So it was with the music that Lynyrd Skynyrd connected with the audience. And the performance was solid. The song list is an abbreviated version of the set the band played a few weeks earlier at Atlanta’s Fox Theatre, documented on One More from the Road.

After decades of hearing the band’s biggest hits – inescapable on FM radio and the stuff of countless cover bands – it’s easy to forget the visceral power of “Free Bird.” The song would serve as a template followed by most every other Southern rock band. But seeing and hearing it played for the Knebworth audience is a reminder of just how powerful the tune is.

The concert film is very much of its time. There are no quick cuts, no dolly shots, and plenty of close-up crowd reaction footage. But the digital upscaling work done to the footage sharpens the visuals. Seeing snippets of the untreated footage in the accompanying documentary If I Leave Here Tomorrow shows just how much the later-day post-production improved the film.

Even though the music more or less duplicates One More from the Road, the Blu-Ray and excellent documentary (a welcome antidote to the dodgy Street Survivors film released last year) help to make Live at Knebworth ‘76 an essential purchase for fans of the band.