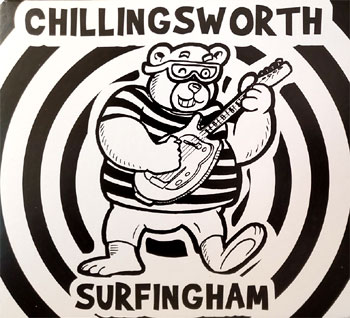 Instrumental surf rock is a beloved sub-style in some quarters of the rock universe. And I proudly reside in one of those corners. Especially when it’s done with equal parts humor and instrumental power/finesse, it can be a truly rewarding listening experience.

And that recipe is the one employed by the playfully-named Chillingsworth Surfingham. The Bay Area guitarist/keyboardist – in real life he’s John Ashfield of The Bobbleheads – is joined by his “brother,” Percy Surfingham (probably Rob Jacobs) on drums. They tear their way through songs that are at once new and familiar. All of the requisite elements are firmly in place: memorable melodic lines that negate the need for vocals, a strong, supple and solid rhythm section, and lots of reverb. And the fourteen cuts aren’t mere variations on a theme: each explores its own original melodic/rhythmic idea.

When it’s done just well-but-not-great, surf rock sounds dated. When it’s done superbly, it’s timeless. No prize if you guess that Chillingsworth Surfingham takes the latter approach. He overdubs multiple guitar parts – each with their own distinctive tonal quality – to get the sound mix he wants. And the results are never messy or overstuffed. These instro tunes have just the right amount of fuzz, grit and gleaming chrome polish.

Expect to grab your volume knob and give it a clockwise spin: this music is designed to be played loudly. Perhaps the strongest among a no-duds colleciton of tunes is “Sommersong (svenskar surfar inte!).” If you ever wondered what the nexus of surf rock, Pet Sounds-era Beach Boys and Sgt Pepper might sound like, the answer lies within ta song with a Scandinavian title. (Visit Google Translate for a chuckle.) With its delightfully busy keyboards, “Surfer’s Ennui” recalls Man…or Astro Man? at their best. And “Skipjack Tuna” hints at what Brian May might sound like if he cast his gaze upon the SoCal surf and sand.

Most enthusiastically recommended to fans of the genre; others are encouraged to check it out as well.