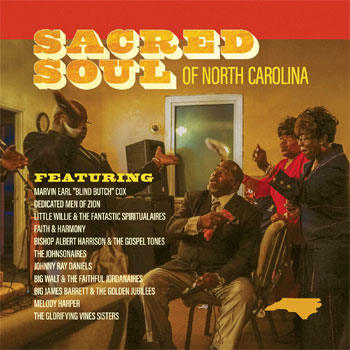 The culmination of a sequence of events put in motion by two music business leaders, Sacred Soul of North Carolina is an audio document of the current state of a fascinating genre. An early 2020 cultural excursion by Music Maker Foundation’s Tim Duffy and Memphis-based record label head Bruce Watson yielded both new recordings – showcasing the stirring talents of eleven sacred soul artists – and a companion documentary film, set for release later this year.

The album’s assortment shows that – in North Carolina, at least – today’s gospel is informed by myriad other styles while maintaining its core values. From Greenville, N.C., Dedicated Men of Zion are the most well-known name on this new collection. Their two contributions to the album – “It’s a Shame” and the title track of their 2020 debut record – are previously released. But their importance (not to mention their sterling quality) makes the inclusion of those tracks a wise decision.

The Glorifying Vines Sisters rely on nothing more than a minimal thumping beat to support their stirring, a cappella “Tell it All to Jesus.” Johnny Ray Daniels takes things in more electric direction with his two cuts; the exuberant “Somewhere to Lay My Head” and “Glory Glory” have all the passion and fire of rock ‘n roll; that energy is simply directed in a heavenward direction.

On “Tell It,” Big James Barrett & the Golden Jubilees draw upon vintage textures – Rhodes piano, phase shifters – suggesting what it might have sounded like had a gospel group commandeered Pink Floyd’s instruments during the recording of 1977’s Animals. Their “Use Me Lord” has a more r&b feel from the same period.

Big Walt & the Faithful Jordanaires are a male answer to the Vines Sisters; their “Ask God in Faith” is reminiscent of a field holler. Faith & Harmony combine Detroit girl group textures and gospel on “Victory” and “We Will Work.” While the former is vocal-only, the latter features a rousing, organ led ensemble.

The Johnsonaires’ “He’s Coming Again” is perhaps the most “churchy” cut on the collection, but it will inspire even the unchurched. When the group plugs in for “Trying to Make It,” they bring the house down.

Bishop Albert Harrison & the Gospel Tones present a minimal, blues-based electric arrangement for “Shake Me.” The group sets aside its instruments for the call-and-response harmony of “Stand Up.” There’s a subtle reggae flavor to “I Want to Be Ready” by Little Willie & the Fantastic Spiritualaires. The group shows off its instrumental chops in service of the shouted/sung “Have You Tried Jesus.”

After a succession of highly-charged numbers, the intensity is dialed down for the vocal and Wurlitzer piano “No Ways Tired” by Marvin Earl “Blind Butch” Cox. The song demonstrates that pop values and pure gospel can peacefully coexist.

Sacred Soul of North Carolina ends on a familiar and deeply inspirational note. Accompanied by absolutely nothing but the listener’s rapt attention, Melody Harper leans into a soul-stirring reading of “Amazing Grace.” It’s a fitting way to end an album overflowing with inspiration.