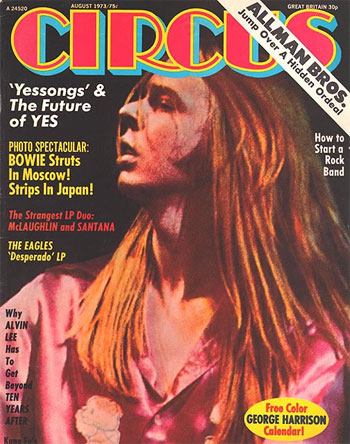 Wakeman earned a lot of press coverage, and plenty of cover stories. This August ’73 issue of Circus is among the earliest.

While he’d sometimes explain that there was a good reason for not playing a given tune, other times, he’d take the suggestions under consideration. “I do the old actor’s thing at the end of every show in the dressing room,” he says. “I make notes on how everything went, any piece that I might be able to improve on a little bit, something that might have happened musically, or if someone said, ‘Why didn’t you play this piece?’ I’d write that down. Then, very much at the end of the tour, when I’m home, I look, and maybe there’s one piece that’s cropped up that people have asked for quite a few times.” And that field research informs the set list for future tours. “I can honestly say that it’s very much an audience-chosen show,” Wakeman says.

His work in television has sharpened his skills as a performer. “I’ve been doing TV for 20-30 years now, on and off,” he says, “and it certainly has helped.” Wakeman notes that performing solo makes a different set of demands on an artist than does playing within a band format: “When you’re with a band, there are pressures to make sure you do your level best to help the band.” And he says that works both ways. “I think that a musician’s job within a band is to encourage the other musicians, and be encouraged by them, too,” he observes. “Trevor [Rabin] would often do things that would inspire me to do something I hadn’t done before, to play something a bit different.” He says that Yes guitarist Steve Howe and bassist Chris Squire similarly inspired him.

At its core, rock ‘n’ roll is supposed to be about rebellion. Against that backdrop, it’s fair to ask if Wakeman is part of the establishment, what with his CBE and all. With a hearty laugh, he says, “That’s a great question! I was very proud to get it. I’m a big Royalist.” He believes that the establishment and the rebellious side can coexist. “Because it’s the rebellion that creates the establishment,” he says.

Wakeman recalls that when his friend (and Queen guitarist) Brian May received a CBE of his own, he climbed atop Buckingham Palace and played “God Save the Queen” on his guitar. “How’s that for rebellion and establishment?” the keyboardist asks rhetorically. “Music and art and fashion have always been a form of rebellion that has an element of tongue-and-cheek, but also a lot of good in it,” he suggests. “So rebellion in music, as a part of the establishment? Bring it on!”

Having played, toured and recorded so much over the last fifty-plus years, Wakeman could be forgiven for deciding that he has few horizons left to explore. But Wakeman emphasizes that he is never at a loss for new projects.

“I’m working on a musical with Tim Rice,” he says, noting that the project will consume at least another year or two before it’s finished. “And I’ve always wanted to do a ballet,” he says. He’s been collaborating with one of the directors at the Royal Ballet to bring that dream to fruition. “Also, my wife writes children’s books, and we want to turn a lot of those into musical adaptations and little playlets that schools of all ages can do,” he says. “So, that’s what’s on our frontier, and that should tie me up until I’m about 104. Then, I’ll start looking again to see what comes next!”

But for the moment, Rick Wakeman is focused on his solo tour. And in between the songs, audiences can expect to be regaled with amusing tales both old and familiar. One such tale concerning the keyboardist has circulated so long and wide that it has attained mythical proportions. As the story goes, onstage in the ‘70s during some of the more ponderous passages of Yes’ epic-length Tales From Topographic Oceans, Wakeman got bored, ordered take-out curry and dined on it while seated behind his huge bank of keyboards.

While the outlines of the tale are based in fact, Wakeman explains that the truth is a bit more prosaic. “I’ll be brutally honest with you,” he says. “I didn’t at all enjoy playing Topographic Oceans on stage.”

During one concert, the band had worked its way to side three, a passage during which the keyboardist found it hard to remain awake. “And my roadie at the time, the late wonderful Toby Errington, used to lie underneath my keyboard on the pretense that if anything went wrong, he could fix it. He shouted out from under the organ, ‘What are you doing after the show?’” Wakeman told him he’d love a curry, after the show: “I bowed my head under and said, ‘I’ll have chicken vindaloo, bhindi bhaji, rice and a stuffed burrata.’”

He says that a mere twenty minutes later – by which time Yes was onto playing side four – “the smell of curry came wafting up.” He planned to wait, but Errington warned him that the food would go cold. “So I laid it out on top of the Hammond,” Wakeman says. “Chris [Squire] came over and had a pappadum. It woke the front row of the audience up, that’s for sure!”

Concertgoers today shouldn’t expect to witness Rick Wakeman eating chicken vindaloo onstage. Instead, he’ll play hits, fan favorites and occasional obscurities from his vast catalog of Yes and solo works and beyond. And in between the songs, the Grumpy Old Rock Star is sure to regale audiences with jokes, asides and irreverent – yet fact-based – anecdotes.

You may also enjoy five more of my features based on interviews with Rick Wakeman: