Note: The following first appeared as a feature in New City, previewing a concert scheduled for November 2021. That show has since been postponed to 2021. Because I had already interviewed Wakeman several times in the past, for this conversation I approached him with a different set of questions. I even got to ask him about the Famous Curry Incident. – bk

Rick Wakeman is well-known for quite a number of things. Dressed in his omnipresent cape, the Royal College of Music alumnus is best known as the on-again, off-again keyboardist for Yes. He first joined the progressive rock group in 1971, appearing on their breakthrough third album, 1971’s Fragile. That record features the hits “Roundabout” and “Long Distance Runaround.” Wakeman left the group in 1974, but subsequently rejoined (and quit again) no less than four more times. And that doesn’t even count his eight years in ARW, a band with fellow ex-Yes men Jon Anderson and Trevor Rabin.

But Wakeman’s association with Yes merely scratches the surface of his life and career. He maintains a creatively fertile (and staggeringly prolific) career as an artist under his own name. Starting with the acclaimed 1973 LP The Six Wives of King Henry VIII, to date he has released more than 100 albums. That’s not a typo, and more releases are on the way. 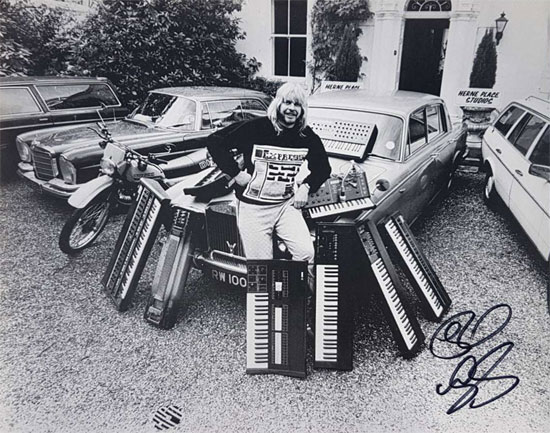 A vintage shot of the man with some of his tools

He’s also a peripatetic session musician with some very high-profile credits. That’s him on piano for Cat Stevens’ “Morning Has Broken,” to cite one example. David Bowie’s “Changes”? That’s him on the ivories as well. He’s also playing on some of your favorite Black Sabbath and Lou Reed records. And today – through the modern miracle of digital file sharing, he often lends his keyboard talents to the work of artists in and beyond the progressive rock sphere. He also plays on many tribute albums, joining a long list of fellow rock legends.

And Wakeman has become known and admired by audiences far too young to have heard those early Yes, Bowie and Cat Stevens records on their original release. In fact he’s a familiar figure even outside of the music industry. For many years now, he’s been a regular fixture on British radio and television. A raconteur of the first order, Rick Wakeman is the source of a seemingly bottomless well of amusing anecdotes and witticisms. Earlier this year he was appointed with a CBE (Commander of the Order of the British Empire) in recognition of his services to both music and broadcasting.

Today at age 73 – and after surviving three heart attacks – Rick Wakeman is as busy as ever. The pandemic – with lockdowns in his native Great Britain far more restrictive than what U.S. residents experienced – doesn’t seem to have slowed him down a bit. Last year he released The Red Planet, an instrumental album that followed on from the music of his most celebrated ‘70s period. Working around the obstacles posed by the global virus, that album was recorded remotely, with Wakeman’s fellow musicians emailing their instrumental parts for assembly into the final mix.

And the self-proclaimed Grumpy Old Rock Star is back on the road now, picking up his busy tour schedule right where he left off before Covid-19 pressed the global pause button. This time, things are a bit different: unlike his previous songs-and-stories tour in which he appeared alone on stage with a grand piano, this run of dates finds Wakeman dusting off a few synthesizers as well, bringing them along to add tonal color and complexity to his lively performances.

“Most things work on the piano,” Wakeman says. “But some don’t, especially when you’re going to take any of the church organ pieces like ‘Jane Seymour’ [from The Six Wives of King Henry VIII] or something like that. So I’m bringing a couple synths this time, just to vary things a little.”

An old hand at performance, Wakeman has done enough concerts to know how he wants to approach a gig. “I do have a set list, but I rarely adhere exactly to it,” he admits. “Different cities you go to, there’s always a story. Something reminds you of something, and you end up playing a completely different piece than what was on the set list.” He notes that he has played in Chicago many times over the years, starting with his first Yes tour in 1971. “We were fourth on the bill,” he recalls with a laugh. “But of course just a few years later, quite a lot of the triple live album Yessongs was recorded in Chicago.”

Wakeman thinks of a set list as a series of stepping stones. “As long as you still get to the main stones and build off the others – not having fallen in the water too many times – you’re all right,” he says. Freely admitting that playing the same set night after night would get boring for him as well, Wakeman sums up his approach onstage as “grumpy old man meets improv.”

Rick Wakeman is a gregarious, outgoing sort, and that comes through in his live show (not to mention during interviews). “I like people,” he says. “I like talking to people.” And while pre- and post-show meet-and-greet events aren’t possible in the pandemic era, Wakeman interacts with fans as much as possible. And he pays attention. Recalling pre-Covid experiences, he says that people would often ask him why he didn’t play one or another specific piece.