It was five years ago when the four Colombia-born members of Combo Chimbita released their debut EP, El Corredor del Jaguar. At the time — and for a couple of years to follow — the group made a point of defining its music as “tropical futurism.” They explained that to mean that the group made music influenced by Latin American cumbia and the otherworldly, Afrocentric and polyrhythmic jazz of Sun Ra. As bassist and keyboardist Prince of Queens told me in 2018, “it’s a way of re-imagining what we are and where we’re going based more on our ancestors than on sci-fi.”

And when Combo Chimbita first ventured beyond its home base of Brooklyn, the musicians who backed vocalist Carolina Oliveros wore masks and adopted pseudonyms. Part of the idea was to differentiate their Combo Chimbita personas from the work each did in other bands, where they play metal and other styles. That approach also encouraged listeners to focus more on the music, and less on the individuals who made it. 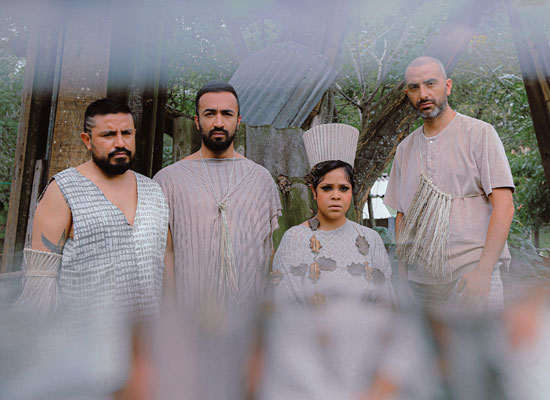 Much of the group’s character comes from its cultural roots, but crate-digging in record stores has influenced Combo Chimbita as well. Prince of Queens points out that New York City’s immigrant culture means that there is a world of variety to be found in used record racks. “A lot of music from immigrant cultures found markets here in New York,” he says. “You can find really amazing Haitian records, African records, Latin records. And through that, we found interesting connections [between] music from Colombia and music from Africa and parts of the Caribbean.”

Combo Chimbita released its first full-length, Abya Yala, in 2017. The album’s title is an indigenous name for the homeland of the group’s members, a region located at the border of Colombia and Panama. And the oral and cultural traditions of that region inform the group’s music as well. “We just tell stories that we feel,” says vocalist Carolina Oliveros. “We don’t think, ‘Will people understand the words or not?’ That’s not the intention.”

On Abya Yala, Oliveros sings in Spanish, so while the music’s heady, psychedelic qualities are obvious, the mystical, occult nature of its lyrics are unintelligible to those who only understand English. But the music still connects with listeners. “It’s easier when you can understand the lyrics,” concedes Oliveros. “But you can’t stop the music. It’s more than lyrics, and it’s more than language. When you feel the vibrations you can connect, no matter what language you speak.”

Oliveros says that for her, the most important consideration when she’s writing — and when the group is jamming, creating — is “trying to think about what the people are going to feel when they hear it.” The specific meaning of the words is important, but less so, perhaps, than the music. “You can go and translate if you want,” she says with a laugh. “But I hear a lot of sounds that even I don’t understand exactly what they [mean]!”

When the members of Combo Chimbita embarked on their first national tour in early 2018, they discovered that their unusual music resonated with listeners, even in smaller markets where cumbia and other Latinx musical styles were all but unknown. Oliveros thinks that it’s that beat that attracts listeners. “Although it’s very strange music for some people, they always feel the beat,” she says. “They always find something to connect it to: ‘Oh, it sounds like this,’ or ‘It reminds me of that.’”

Guitarist Niño Lento Es Fuego thinks that the rock and psychedelic elements of Combo Chimbita’s music provide an access point as well. “We have lots of heavy synthesizers and drums,” he points out. “We have instrumentation that is very common for people who listen to rock or reggae.”

The 2019 release of the group’s second album, Ahomale signaled some changes. Oliveros still sings in Spanish, but these days, the masks are gone, and the members’ given names occasionally slip out in interviews. Perhaps more significantly, Combo Chimbita no longer embraces the label once used to introduce them to a wider audience. “We’re not tropical futurists anymore,” says Niño Lento. Their identity is now tied to the name of that first album: “We are Abyayalistas.”

On Ahomale, Combo Chimbita digs deeper into Colombian folklore and tradition. But as before, unpacking that for English speakers requires some explanation. “Ahomale is a Yoruba word,” Oliveros says. “It’s a force, a [combination] man and woman spirit.” And the new album is a conversation between the components of that spirit.

Musically and lyrically, then, Combo Chimbita’s second full-length is less a departure, more a realignment and continuation of its original direction. “Ahomale is a complement to Abya Yala,” Oliveros suggests. “When we write music, one album is a continuation from the [previous one]. We’re trying to write music that’s like a saga.”

And the saga continues. In early September Combo Chimbita released a haunting new single, “Memoría.” It follows two earlier singles, the howling, kinetic “Mujer Jaguar” and the dreamy, trip-hop-flavored “Todos Santos.” The three tracks are previews of the group’s third album, scheduled for release in January. Those lucky enough to see the group at a live date on this tour may also hear other as-yet-unreleased songs from the new record.

For a group that places so much emphasis on singing in Spanish and exploring the folkloric traditions of South America and Africa, Combo Chimbita is largely dismissive of the idea that the group is about communicating its cultural identity to listeners. “To be honest, we’re just being ourselves,” says Niño Lento. “We’re not thinking, ‘Oh, I’m going to show them this or that.’ We’re just expressing what we feel and creating music. And who we are is coming through.”

But the music is about connecting, even for those listeners who miss out on Combo Chimbita’s lyrical content. At a concert, “We want people to be happy, to have a good time, to connect with the people around them, and to have a spiritual experience,” says Niño Lento.

Oliveros agrees. “That’s important,” she says. “That spiritual experience, that’s the music. It’s a ritual, yet it’s natural.” And it doesn’t require a lot from the listener beyond opening themselves to the music. “You don’t have to make anything,” Oliveros says. “Just share your vibrations.”

You may also enjoy: My Combo Chimbita interview from 2018.