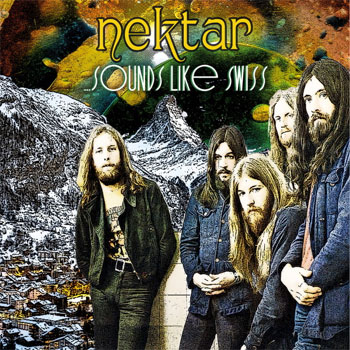 Nektar was one of those bands that got lost in a sea of great music. Though they were British, being based in Germany certainly didn’t help gain them exposure in places like the U.S. So despite the high quality of their music – especially on albums like 1971’s Journey to the Center of the Eye, 1972’s A Tab in the Ocean and Remember the Future from ‘73 – they made little commercial headway in the States. Often regarded as their high water mark, Remember the Future did reach #19 on the U.S. album charts, but today it’s unfortunately little-remembered.

But among those in the know, the Nektar catalog is highly regarded. Muscular rock music that displayed the group’s ambitious nature, Nektar’s body of work is nonetheless characterized by a healthy down-to-earth nature that generally avoids some of progressive rock’s excesses. And while the band is nobody’s idea of krautrock, the group’s home base does seem to have influenced its musical chartacter: there’s a trace-y, hypnotic vibe to even the most pile-driving rock excursions.

The year 1973 saw the release of not one but two Nektar albums. But in contrast to the conceptual nature of Remember the Future (with an album-long track), ...Sounds Like This was a double LP that relied more upon improvisation and – dare I utter the word – jamming. But wait, gentle reader: don’t be put off by that malignant label. Nektar knew how to jam without getting all self-gratifying about it. …Sounds Like This isn’t the band’s best, but it is a worth excursion done during the band’s peak.

All of that is context for a new archival release from Nektar. The punningly-named Sounds Like Swiss isn’t an especially appetizing title, but the music contained therein is more than worthwhile. Recorded live in 1973 during dates in support of …Sounds Like This, it’s a 2CD +DVD document of onstage performances. The set list spans the group’s earliest release, and includes material that appeared on …Sounds Like This as well.

The sound quality is quite good, and the performances are energetic, impassioned, and strike just the right balance between freewheeling/exploratory and coherent/structured. Lead vocalist Roye Albrighton is in fine form, as are his bandmates. Nearly all of the material on the second audio disc –sourced from the Palladium in Geneva – is featured on the DVD.

The film is in black-and-white, but it’s commendably sharp. And the producers of this latter-day arcival release have resisted the temptation to letterbox/upscale the moving images for modern screens; it’s presented in its original 3×4 format, which is perfectly fine. A multi-camera shoot, it gives prime-era Nektar the care and attention this band so richly deserved, and so rarely got.

Listeners who enjoy the band’s early ‘70s work (and/or the surprisingly solid late-period release Time Machine (from 2013 and featuring Yes man Billy Sherwood helping out) will find …Sounds Like Swiss a supremely enjoyable set. And those who don’t know the band’s music – but who appreciate the sounds and textures of bands like Deep Purple at their most ambitious – will find …Sounds Like Swiss as fine an entry point as any of Nektar’s studio sets of that era.