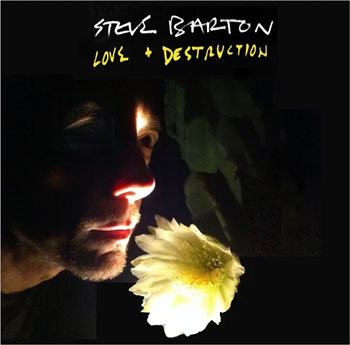 Steve Barton is best known as one of two guitarists and songwriters in Translator, the San Francisco band that gave us “Everywhere That I’m Not.” But while the band went semi-dormant a number of years ago, Barton remains active as a solo artist. His latest release is Love & Destruction. Like his earlier records, it builds upon – follows on from, one might say – the sound and style of his Translator music.

In practice, that means that while one will hear strong echoes of that signature sound, Barton takes the music to places that couldn’t have been conceived of within the framework of that band. “Freedom’s Not Free” is a prime example: the album’s superb opening track, it has a moody, vaguely sinister melody, but the arrangement features clarinets and horns, and Barton’s guitar texture leans in a distinctly jazzy direction.

But then things quickly move into more familiar territory. The chiming rocker “Last for Best” wouldn’t have been out of place on Evening of the Harvest. Backed by a crack rhythm section – Translator drummer Dave Scheff and bassist Hilary Hanes (the latter known for a time as Hilary Stench of Pearl Harbor and the Explosions), Barton showcases his skill at crafting a hooky tune.

And he stays in contact with his other Translator bandmates. Bassist Larry Dekker is on hand for two songs, and Robert Darlington co-wrote “Mind Song.” But everyone involved in the project is intently focused on serving the songs: this is very much Barton’s show.

“Burying Suit” has a feel reminiscent of Delaney and Bonnie: proto-Americana with a rocking edge intact. “Tonight You’re Buying Me a Rainbow” sounds like a cross between Translator and Neil Young with Crazy Horse. “Velvet Curtains” is a sort of Lou Reed meets the Everly Brothers (and it works!).

The intimate vibe of “Coulda Been Me, Coulda Been You” builds a rock arrangement around his acoustic guitar. The hypnotic “Mind Song” has a Satanic Majesties-era Stones (or White Album Beatles) vibe. “The World is a Gangster” displays a previously unheard funk side of Barton’s muse. The lead slide guitar on “Never Gonna Last” is reminiscent of George Harrison’s solo work, with – for good measure – a Dylanesque vocal.

And as it happens, some of those cues – Stones and Dylan – hint at the direction Love & Destruction takes: Dylan’s “To Ramona” (from 1964’s Another Side of Bob Dylan) and the Rolling Stones’ “The Last Time” (from 1965’s Out of Our Heads) are covered on the album. The former has a wonderfully Byrdsy jangle; the latter…well, um, go listen and find out. Elsewhere, the Beatles get a brief nod in the lyrics of the somewhat strange “From Never and Nowhere” when Barton intones in a gravelly spoken-sung voice, “turn left at Greenland.”

But the overall focus of the record is squarely upon Steve Barton’s original songwriting. And that’s as it should be, because he’s a fine lyricist, a compelling vocalist, superb guitarist and excellent all-around musician and arranger. Love & Destruction draws from the best of what Barton is known for, while showing that there’s much, much more to his creative abilities. Recommended.