Songs like “Indiscipline” have undergone nearly total reinvention: where in the ‘80s, Adrian Belew delivered the song’s odd, inscrutable lyrics in spoken-word fashion, these days Jakko Jakszyk sings them, applying a heretofore undiscovered melodic quality to the song. Yet the whiplash percussion dialogue (trialogue?) among Mastelotto, Stacey and Harrison keeps the composition well out of pop territory, closer instead to some unholy mix of gamelan, metal and jazz. Mastelotto mentions the tune as one in the Crimson set where he has a fair deal of freedom, something not to be taken for granted when a band has three drummers. “I sort of improvise and throw the drumming around differently every night,” he says. There’s structure, “but the way the notes fall is different every night.” 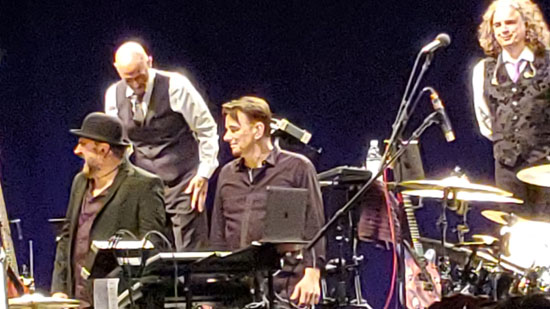 The band’s 2017 tour featured three-hour shows, and those dates often explored more abstract musical frontiers. Owing in part to the demands of mounting a tour in the era of COVID-19, King Crimson’s current tour features a shorter set. As much as Mastelotto enjoys digging into the more intricate works, he notes that recent sets built around some of the band’s best-loved material (there are no “hits” in King Crimson’s world) – songs like “Epitaph,” “In the Court of the Crimson King,” “Starless,” “Red” and “One More Red Nightmare” – make for a more powerful show. “Wow,” Mastelotto enthuses after citing that list of songs. “That’s a power punch, man!”

King Crimson squeezed rehearsals in right before the current tour got underway in late July. Shipping snafus meant that the gear shipped over form England was late in arriving, so the rehearsal period was shortened. “It’s not a band of musicians that are happy to ‘just turn up’ to the show,” says Collins. He marvels at the memory of seeing UK punk heroes The Damned. “They never used to rehearse!” he says with a laugh. “We can’t do that, because of the complexity of the music.

Even without the changes wrought by touring during a pandemic, for King Crimson, being on the road is different now than it was in the old days. The band travels by bus – three buses, actually – and Mastelotto says that time spent together on the road has increased camaraderie among the band members. And that manifests in the music. “As things grow and you go through growing pains, bands just get tighter,” he says. “The music gets tighter as the personalities gain more trust in their interactions.”

Mastelotto thinks that the malleability of King Crimson’s material – its ability to withstand being reinterpreted and reinvented – is a testimony to its greatness. “I think that Robert [Fripp] in particular will be recognized as one of the great composers of the last century,” he says. “Stuff like ‘Larks’ Tongues in Aspic’ and ‘Fracture,’ those are serious compositions.”

He emphasizes that what audiences hear onstage, though, is the product of the creative commingling of all seven musicians. “The [whole] band contributes to it,” he says. “Robert doesn’t come in telling individuals directly what to play, with the exception of sharing his guitar parts between him and Jakko.” 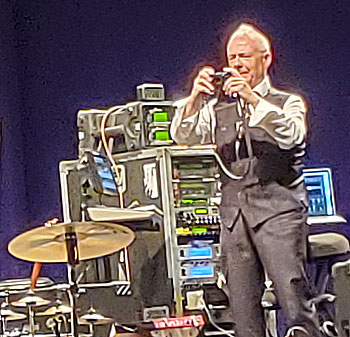 Mel Collins notes that back in the early ‘70s when King Crimson was a quartet, they were playing challenging material. “We used to play ‘21st Century Schizoid Man, and as a four-piece, we played it really well,” he says. “It’s not so easy with the seven-piece.” Yet somehow, if the seven-headed beast doesn’t make performance of the complex material look easy, it definitely conveys the impression that this lot knows what it’s doing.

There’s an old adage among musicians about the importance of the spaces between the notes. And that’s one that the members of King Crimson have taken to heart. Sometimes the music is so dense that the best thing for one or another of the players to do is…nothing. And that’s a daunting prospect, especially if you’re a drummer whose kit is set out near the front edge of the stage, well-illuminated and in full view of the audience.

“I love to hear Jeremy and Gavin playing solo,” Mastelotto says. But when he lays out of a musical passage, he’s conscious of not wanting to be a distraction. “In the old days, the lights might go dark, and you could stand up and exit, or dry your face off with a towel,” he says. “But we can’t do that now.” King Crimson made the collective decision that all members would remain onstage throughout the performance; no schmaltzy spotlit solo turns for this aggregation. “We decided to approach it like when you see an orchestra or symphony: the bassoon player doesn’t leave, even if he’s waiting 500 bars for his moment.”

Nothing is guaranteed, especially these days. And Fripp – who has “retired” a few times already – is 75. Levin is the same age; Collins is about year younger. Even the group’s youngest members Stacey and Harrison are nearing 60. And all seven are busy with myriad other musical projects outside of King Crimson. But as longtime followers of the band know, just because the group stops, that doesn’t mean it won’t start again someday. Yet if one thing can be assured, if it does go away and reappear, King Crimson X will almost certainly be different than what came before. That’s central to its…well, charm isn’t a word often applied to this band, so let’s say character.

Now as ever, everything about King Crimson’s music – its composition, its arrangement, its execution onstage, its history, its prospect of future activity – is a challenge. “It’s the age-old thing,” Mastelotto laughs as he twists a metaphor. “We’re trying to get ten pounds of music into a five-pound bag.”