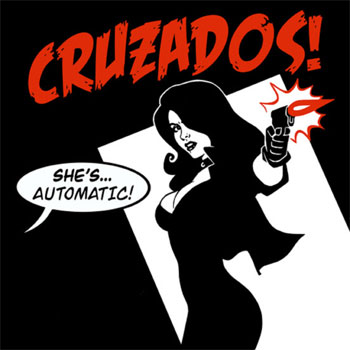 When Los Angeles punk outfit The Plugz metamorphosed into The Cruzados in 1984, they altered their musical approach. The spiky punk textures showcased on the soundtrack of Repo Man remained, but some of the edges were sanded smooth. The quality didn’t diminish; they simply made music that as somewhat more accessible. Two albums – a 1985 self-titled debut and After Dark from 1987 – were the sum total of their studio output, and while a third album was recorded, it never saw the light of day. The band endured frequent lineup changes, and by the end of the decade, the members had gone on to other pursuits.

In 202 The Cruzados returned, though only one member, bassist Tony Marsico, had been in the ‘80s-er lineup; original members Marshall Rohner and Chalo Quintana both passed away in recent years, and Tito Larriva leads his own band.

Marsico is joined on She’s Automatic by members of another group, Little Caesar. The record also features an impressive lineup of guests including John Doe (X), Dave Alvin (The Blasters), Melanie Vammen (The Pandoras), Los Lobos’ David Hidalgo and Steve Berlin, and a half dozen others. But despite the proliferation of session player, She’s Automatic has a cohesive sound. Thing is, it’s one you’ve heard before … but not on Cruzados LPs.

The new music doesn’t really sound like the Cruzados of old, but the spirit is there. Meat-and-potatoes rock is the order of the day, with melodies that evoke thoughts of ‘60s garage rock on tunes like “Nine Million Tears,” a distant cousin to a similarly-titled tune you might know by one “questionable” artist.

The Bo Diddley beat of the title track is joined by some stinging slide guitar. “Son of the Blues” does indeed infuse the current-day Cruzados sound with some bloozy texture. “Sad Sadie” Is windswept Southwestern heartland midtempo rock, the kind of music Eagles wish they could make. “Long Black Car” is a bit derivative, built on the same chassis as ZZ Top’s “Tush,” but it’s fun tune nonetheless. The melody of “Let me Down,” too, is one listeners will have heard countless times, but the highly-charged I-IV-V “Wing and a Prayer” that follows it has more to offer.

“54 Knockouts” feels like a retread of other, better-known songs, and the album closer “Rock That Boat” takes its framework from the same source as the Doors’ “Break on Through.” But considered outside of context, they’re both good songs, played with conviction and verve.

Docked a point or two for coming up short on originality, She’s Automatic still succeeds on the merits. It rocks, and unless you’re a very, very picky audio consumer, that’s enough.