Climbing That Tree: The Story of She Trinity (Part 3 of 5) 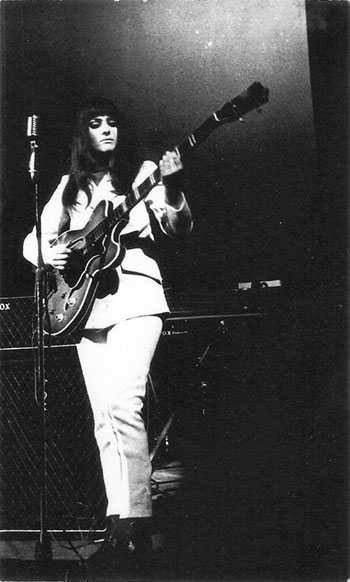 Shelley Gillespie’s main instrument was a Fender Telecaster. “I also had a Vox 12-string for a brief moment, and an acoustic Guild dreadnought,” she recalls. The group’s selection of material reflected the varying tastes – and abilities – within the group. “Robyn liked to tell people that she was once told she had a voice like a silver bell,” she says with a skeptical laugh. “So she would sing ballads and things. Pauline sang quite well; she could do blues. Rusty didn’t have too much of a voice, but she was fun. And I just sort of joined in the backing [vocals].”

Pauline Moran started out in She Trinity with a white Fender Precision bass. “That was nicked out of the back of our van,” she recalls. Luckily, the instrument was insured, so she replaced it with a Burns Black Bison.

Solid musicianship combined with good looks and a unique all-female lineup meant that She Trinity didn’t have a hard time securing live dates. “We were playing all the ballrooms,” Yorke says. The band was on concert bills with other popular groups including The Kinks, The Tremeloes, Hot Chocolate and The Hollies. “About the only ones we didn’t work with were the Beatles and the Rolling Stones,” she says. “And The Beatles weren’t doing concerts then.” She says that the group was “the warm-up band for The Who for six of their concerts.” 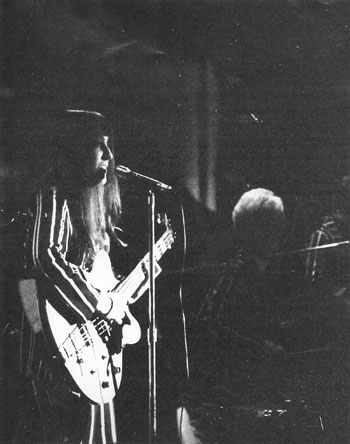 Yorke says that at the time, she wasn’t very familiar with The Who. She remembers taking a between-sets break on the fire escape at a ballroom in Newcastle. “There was a guy sitting there,” she says. That was her first time meeting Keith Moon. “He was lovely,” concurs Gillespie. “I didn’t get to know him well, of course, but he came across as really, really nice. Unlike Pete Townsend, who didn’t.”

“I remember Roger Daltrey being very nice and approachable,” Moran says. “Coming into the dressing room and sharing a huge bottle of White Horse scotch that he had.”

The specific details of various She Trinity members coming and going are lost to time, but at some point – probably 1967 – Hill left, replaced by keyboardist Eileen Woodman (now Harron). The band was preparing for a succession of live dates in West Germany, and needed an organist. Moran had seen Woodman onstage back in the Missfits days. “I remembered going to the Twisted Wheel Club in Blackpool, and seeing the Blues Giants with a fantastic girl organist with a Hammond L100,” she says. So she and Yorke set off to Manchester, and then Loughborough, to track down Woodman.

“I felt a bit bad that they’d been trying so hard to find me,” Woodman says. “I thought it would be a bit churlish to turn them down.” Moran says that the keyboardist had some motivation to accept the offer to join. “Eileen’s idea was that she would have money coming in to support her husband through his PhD at Loughborough University.” Woodman joined and remained with She Trinity to the very end. “We got her a Hammond C3 [organ] and a screaming Leslie speaker,” says Moran with a sly laugh. “You can imagine the sound.” Woodman agrees. “I did have a big Orange stack as well: two 4×12’s and a 50-watt amp.” 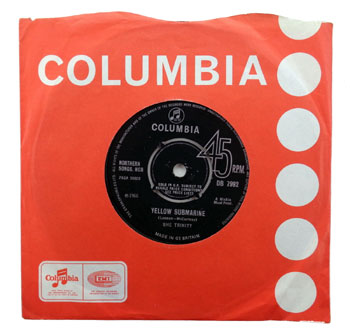 Brian Epstein was not best pleased to discover this single.

None of the band members will admit to having groupie followers. “When you say ‘groupie,’ you think of the ones who follow the Led Zeppelins and the like around, and throw themselves at them,” Woodman says. “No, we didn’t get any of that at all. I think we might have scared them a bit.”

But they did encounter their share of predatory sexism. Gillespie recalls a show in Leicester, introduced by the “illustrious” Jimmy Savile, she says. “His chauffeur was on the prowl that night; he arrived looking for something to entertain him. But we decided not to.”

Even the most skeptical audiences were quickly won over by She Trinity. Gillespie recalls a gig opening for “a pair of youngsters” called The New Merseys. “When we came on, they all booed and booed and booed,” she says. “We were nearly screamed off the stage by their women fans. But all their boyfriends moved forward. It was brilliant!”

A fourth single release found She Trinity running afoul of a major player in the music business. For what would turn out to be the band’s final session with producer Mickie Most, the band recorded a song brought to him – according to Yorke – by Donovan. It was The Beatles’ “Yellow Submarine.” Gillespie says the track was notable as the first time the band was allowed to play on a planned a-side.

Gillespie says that the group cut the song before Mickie Most even arrived at the session. Their inventive touches included launching into a few bars of “Louie, Louie” for the break that comes after “And the band begins to play…” “That whole recording was pretty much us,” Gillespie says. Most appears on the record, voicing the captain’s spoken parts. 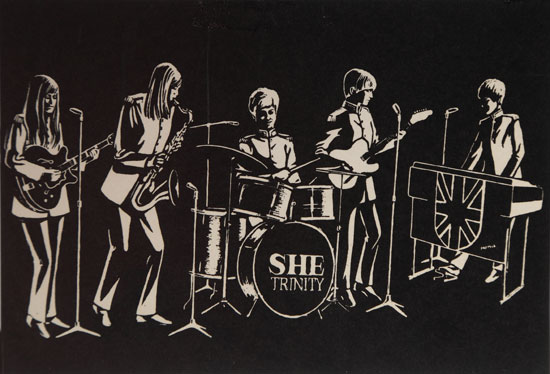 Graphic art depicting the Barbara Thompson-era lineup of She Trinity

The original idea, she recalls, was that “Yellow Submarine” wouldn’t be released in England. “Mickie Most said, ‘This will be good for you,’ so we did it. And of course it wasn’t.” Yorke picks up the story. “Mickie Most phoned up Brian Epstein and played it to him.” Epstein was not amused. “He called EMI and said, ‘Squash She Trinity, and rush-release the Beatles’ version as a single.’” Yorke goes on to assert that Epstein called Melody Maker, telling them that if they wrote about She Trinity, they’d lose out on any future Beatles exclusives. “We were destroyed by Brian Epstein,” she says. “Because he figured our version was better.”

The revolving door membership of the group continued. Shelley Gillespie says that She Trinity played an assortment of concert halls, universities and pubs. “We never knew, really, from one week to the next where we were going,” she says. “It was just up and down the country in this Volkswagen bus.” She left the group after deciding she was “sick of eating Golden Egg and Wimpy’s. One of the main problems was that we all had different tastes in music, and some of us didn’t like each other very much.” Gillespie soon took a job with the BBC. “And then I was able to eat reasonable food from time to time,” she says. Today she lives in Australia. 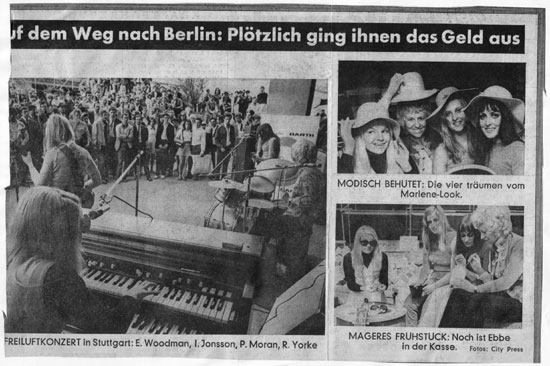 She Trinity made serious inroads on the Continent.

Future jazz great Barbara Thompson joined She Trinity in July 1967, the day after marrying jazz fusion drummer Jon Hiseman. She came on board just in time for a tour of West Germany. “We played mainly at clubs and U.S. army bases there,” she says. “Jon and I were broke, and it helped pay the mortgage!” The 22 year old musician added a new dimension to the group’s sound, and its visual style as well. “Barbara could play two saxophones at the same time,” like Rahsaan Roland Kirk, Moran recalls. “She had tenor, bass, baritone, soprano and alto [saxophones] and flute all in a row in front of her, and she used to take her pick as we did the gig.”