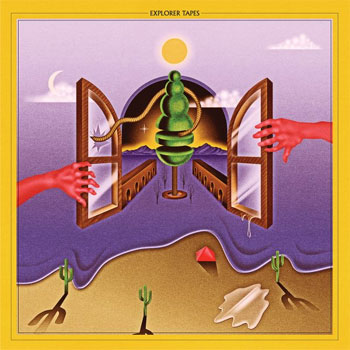 As someone who follows such things – and as such ought to know better – I nevertheless continue to be amazed whenever I learn about a promising act that recorded an album only to find it shelved. It’s the musical version of that iconic final scene at the end of Raiders of the Lost Ark, with the master tapes going into an unmarked crate stored deep in a warehouse, never to be heard.

I can only imagine the heartache that must go along with that for the artists who have poured their creativity into what should have been their debut release. Some of them went on to other things, to be sure, but many never got another shot.

In 2015 it happened for a Texas band called Explorer Tapes. The band’s songwriters (Max Townsley and Drew Erickson) had already proven themselves as pop/rock composers, penning songs for artists in a wide variety of genres and styles. To wit: they wrote tunes recorded by Keith Urban, David Baerwald (of David + David) and others. The success of Urban’s “Texas Time” meant they had the creative/commercial wind at their backs.

The duo put together a band and landed a deal with Warner Brothers. Thet headed into the studio with a well-known producer, and were joined by sessioners including Roger Manning Jr. of Jellyfish. Three weeks after beginning, they had a finished album.

And that was that. The familiar story line – the reps at the label who had supported them were gone in one of the all-too-frequent staff reshufflings – meant that their self-titled debut languished on the proverbial shelf.

The folks at Grammy-winning label Omnivore Records have a history of helping bring forgotten or unjustly hidden music to the ears of music lovers, and they’ve done it again with Explorer Tapes. Six-plus years after its intended release, the Texas group’s debut can finally be heard.

So, you may well ask, what does it sound like? It’s breezy, melodic midtempo rock with a subtle country vibe. The songs are short on twang; this is neither Modern Country™ nor Americana. Instead, there’s a warm heartland feel, not unlike what Gin Blossoms might have sounded like if they didn’t rock as hard. Manning’s keys add a level of orchestration that brings out the sturdy melodic content.

The songs and arrangements never reach the transcendent pop heights of Jellyfish, but Explorer Tapes are defintely cut form similar cloth as Strurmer and Manning. 1970s and ‘80s soft-rock acts like Pablo Cruise, Stephen Bishop and Christopher Cross are useful touchstones for the kind of music you’ll find within the album’s 12 songs. Actually, there are 14; the last two are listed as “bonus tracks,” but since nobody’s ever heard any of this music before, that description is essentially meaningless.

Would the world have changed in any important way had Explorer Tapes seen release in 2015? Perhaps not. But does it deserve a hearing? Absolutely. So listen and enjoy.