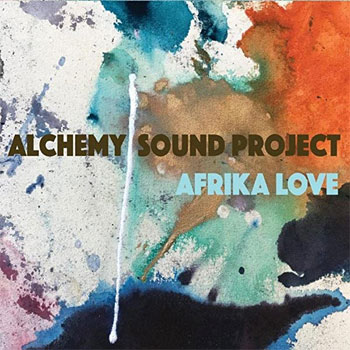 Jazz differs from rock in some important, fundamental ways. While there are exceptions, one is the manner in which jazz ensemble tend to be collectives of equals rather than stars with backup. So it is with Alchemy Sound Project, a septet in which at least five of the musicians are composers. On Afrika Love, each of the five tracks is written by one individual member.

And each writer/musician has his/her own character, and that character is expressed in the music. Double bassist David Arend’s “The Fountain is discordant and dissonant, with stuttering meter. Its abstract and manic, yet not so unstructured as to fall into the free jazz category.

Pianist Sumi Tonooka’s “Dark Blue Residue” has a more conventional character, though it’s far form ordinary. Tonook’as fingers skitter up and down the keyboard, with alluring melodies scattered across the work. Midway through the piece, things turn toward a sophisticated post-bop style. The song’s arrangement suggests a larger collection of musicians than is actually present.

Salim Washington’s “Afrika Love” is the work that gives the album its title. Washington plays tenor sax, flute, bass clarinet and oboe, and his composition is orchestral in its density. It’s in turn atmospheric and deeply lush and melodic. It even swings in places.

Trumpeter Samantha Boshnack brings “The Cadillac of Mountains” to the project. Like all five tracks, the composition provides ample opportunities for each player to sine, but Washington’s bass clarinet is a standouts here; it’s employed to superb effect. Toward the cut’s end it moves first in an exotic direction, then a funky, cinematic one, with underpinning form drummer Chad Taylor and Tonooka’s piano.

That tune also features some lovely tenor saxophone work, courtesy of either Washington or Erica Lindsay. Lindsay also plays clarinet and alto flute, and her composition “Kesii” closes the album. It’s a largely meditative piece, with an emphasis on subtle melody, glistening piano runs and some more fine ensemble work.

Like Taylor, trombonist Michael Ventoso doesn’t have any composer’s credits on Afrika Love. But his work as a player shows that – as in the best jazz ensembles – is the equal of his fellow musicians.