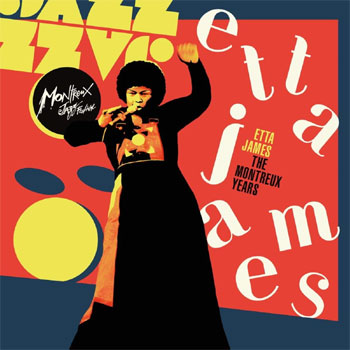 Announced in March 2021, an archive of historically significant musical recordings is now beginning to be shared with the wider listening audience. Run by Claude Nobs, the highly regarded Montreux Jazz Festival hosted some of the biggest names in jazz (and beyond) in Switzerland for its annual concerts. In a new arrangement with BMG, selected concerts are seeing release on CD, digital and vinyl.

The first two releases in the series – both titled The Montreux Years – are 2DCD sets from Nina Simone (covered here) and Etta James. The latter set is culled from recordings made in 1977, 1978, ‘89, ‘90, and ‘93. With a powerful voice and outsize personality, James would have been rapturously received in Montreux. Her material transcended genre, but the one thing she didn’t really pursue was a career as a jazz singer. It’s a testament to the wide net cast by Nobs that James was on the bill. The magnitude of her talent explains the fact that she played there six times.

The fidelity on these recordings is superb; even the ‘77 recording sounds as if it were made yesterday. And the band always included top-flight players; keyboardist Richard Tee, drummer Steve Ferrone and guitarist Brian Raqy (currently Paul McCartney’s lead guitarist) were all part of the band in July 1977. Nobs himself was onstage in ‘78, ‘90 and ‘93 on harmonica.

But those players were there to back up Etta James, and they did that. High-energy soul and r&b is the oder of the day on much of this set, though subtlety is on display on numbers like “A Lover is Forever” (1993) and a 1989 recording “Damn Your Eyes.’ the latter was a song off James’ then-current release Seven Year Itch; its inclusion underscores the fact that James wasn’t – and wasn’t treated like – a “legacy performer.”

Supercharged tunes like “Tell Mama” find the singer in top form, backed by a powerful, classy band. When she digs into the blues (“Running and Hiding Blues,” “Stormy Monday” and others) James does it with conviction and spirit. She and the band rock hard on “Beware,” and she makes tunes popularized by others (“Respect yourself,” “Dust My Broom”) her own.

Of course she turns in a performance of “At Last,” her signature tune. But the way in which it’s approached shows that James was a forward-looking artist, not content to trade on past glories. The song appears – in a 1989 performance – as part of a medley. “I’d like to do a medley of songs I recorded in the early sixties,” she tells the audience.” At that point, I think they thought I was gonna be a jazz singer.” As the medley demonstrates, she could have been. But she was so much more.

Bob Merlis’ succinct liner note essay hits the high point and puts the Montreux dates into the context of Etta James’ career. The packaging – mimicking a CD-sized hardcover book – is superb. Everything about Live at Montreux is spot-on. Here’s looking forward to future releases in the series; with this and the Nina Simone release, BMG has set a high standard.